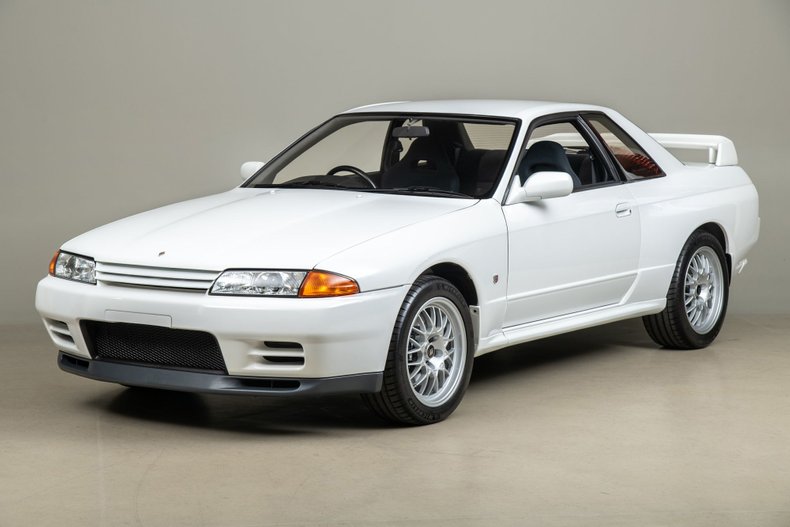 Price: Contact Seller for Price
1994 Nissan R32 Skyline GT-R V-Spec II View high resolution photos Pristine, 100% stock and completely unmodified Possibly one of the finest examples in existence, one of approx. 1,306 produced V-Spec I/II created in celebration of Nissans Group A racing dominance 21,947 miles since new (35,321 kilometers) 5-speed manual transmission, 2.6-liter twin-turbocharged inline-6 engine Sophisticated all-wheel-drive system, 4-wheel steering Advanced torque-vectoring, inspired by Porsche 959 systems Nissans Skyline GT-R heritage spans back half a century, with their first Skyline GT-R produced from 1969 to 1972. Enjoying legendary success in local Japanese touring car racing, the GT-R name was a symbol for success. In 1973 there was a brief production run of second-generation cars before the GT-R name was ushered away for almost 16 years. It would return again in the form of the 1989 R32 Skyline GT-R. A complete and utter destruction of its racing rivals in Japans Group A racing earned it the nickname Godzilla. It also found success in the Australian Touring Car Championship in 1991 and 1992, cementing itself in automotive history as one of the most dominant Japanese production cars to ever race. The R32 GT-R was a technological automotive marvel. Playing host to a level of sophistication that up to that point had only been seen on the Porsches ground-breaking 959, the GT-R impressed in all aspects. An electronically controlled all-wheel-drive system with advanced torque vectoring worked in tandem with 4-wheel steering, known as Super HICAS. A twin-turbocharged 2.6-liter engine produced an advertised 276 horsepower due to a pact between Japans car makers, while in reality the engines produced closer to 300 horsepower. With the engines being designed for racing, it was relatively easy to tune the engines well beyond those numbers. These advances allowed the cars to be just as nimble as their predecessors despite being a larger car. The V-Spec editions were made to celebrate the success of the GT-R in Group N and Group A racing (Victory Specification). These special edition GT-Rs were announced on February 3rd, 1993. This package added Brembo brakes, a retuned all-wheel-drive system for better performance, a lightweight aluminum hood and a front bumper from the Nismo R32. 17 BBS alloy wheels were standard with the V-spec cars, with V-Spec II receiving larger tires of 245/45R/17. Approximately 1,306 V-Spec II cars were produced, making it one of rarest variants of the R32. This 1994 Nissan R32 Skyline GT-R V-Spec II is quite possibly the finest example in existence. With only two owners throughout its history, impeccably maintained, and completely unmodified in every way, this GT-R is a shining jewel in a sea amongst all others. The GT-R had two owners during its time in Japan and driven less than 900 miles a year, only recently imported by Canepa to the U.S. Once the car arrived at Canepa, it was inspected meticulously from front to back to ensure its originality. The cars condition defies comprehension. Although it was built 25 years ago, youll be hard pressed to find a reason to not believe that this car is most likely one of the finest examples. There is no visible wear in the interior, the factory finishes throughout the car are in impeccable condition, and the driving dynamics of the car reveal a well-cared-for machine. Once the car was given a complete mechanical inspection and service, it was sent for a concours-level detailing by Canepas detail technicians. The entire underside was completely detailed, revealing the factory finishes in excellent condition. Then it was treated to a full meticulous exterior and interior detailing process. Using only foam pads and light polishes on the original Crystal White paint has given the entire exterior a shine like a brand-new car off the showroom flo

Note from the publisher:
Welcome to our collector car marketplace where we feature thousands of classified ad listings of vintage cars for sale. We hope that you will bookmark our site and visit often; our cars are updated every day. Furthermore we encourage you to subscribe to our mailing list so that we may periodically notify you of interesting classic cars that become available.
Home > Classic Cars For Sale > Nissan > Skyline GT-R > 1994 Nissan Skyline GT-R