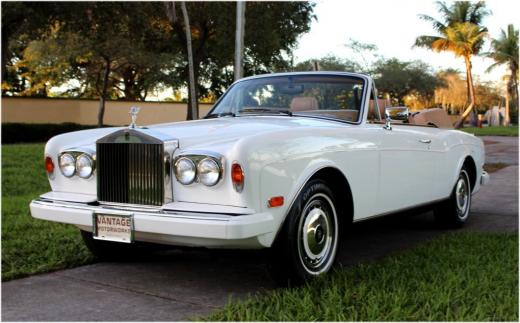 Price: Contact Seller for Price
The final version of this increasingly sought after (and difficult to secure) deservedly popular modern day classic body style, this extraordinary never damaged specimen has traveled only 22,704 Southern miles since first delivered to Dallas, Texas twenty three years ago. The ownership history since November, 2009 at 14,100 miles directly involves our firm as no other dealership has resold it since.

Elegantly finished in Acrylic White with Tan top and hides piped Parchment, it is as close to new in every respect as anyone could reasonably expect in light of age, attested to by the 2016 RROC National First Place Award in its pedigree. Original books, tools, original tire changing gloves and radio equipment have all survived in mint condition.

The 2nd Series Corniche IV might well have been dubbed V as its mechanical aspects differ greatly from its earlier cousins, most notably in the area of the redesigned top, Zytek managed engine with Cotsworth designed cylinder heads as still found in turbocharged form in the larger Bentley automobiles, overdrive ratio gearbox and electronically dampened suspension and braking systems. Very few of these wonderful performers were supplied when new, perhaps in part to their significant original MSRP of $269,000 plus Federal Luxury Tax (increased to $284,000 in 1995), a heady sum in those recessionary times.

We believe this to be the finest of necessarily few examples currently available anywhere.

Note from the publisher:
Welcome to our collector car marketplace where we feature thousands of classified ad listings of vintage cars for sale. We hope that you will bookmark our site and visit often; our cars are updated every day. Furthermore we encourage you to subscribe to our mailing list so that we may periodically notify you of interesting classic cars that become available.
Home > Classic Cars For Sale > Rolls-Royce > Corniche IV > 1994 Rolls-Royce Corniche IV