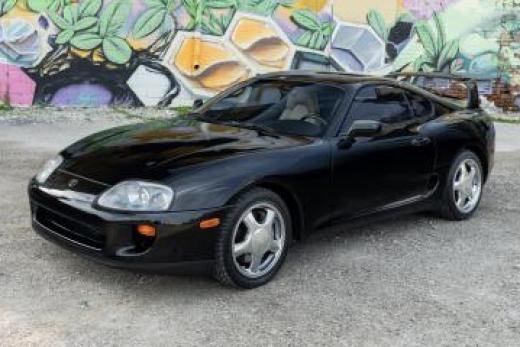 Mileage: 75,435
Chassis # JT2JA82J0R0019725
Showing Just 75,435 Miles From New
A One-Owner Example & Clean CARFAX Report
Major Service Just Completed Including New Clutch, Timing Belt & Tires
Well Serviced & Cared For, Complete With Books & Accessories
All VIN Stickers Are Present & Correct
Toyota has always been a company to push the boundaries of automotive design and technology going back to the 2000GT in the late 1960s. In an attempt to bring to market the best sporting grand tourer they could, Toyota released the Supra in 1978. The first Supra borrowed its styling heavily from the Celica, but specific body changes were necessary to accommodate the inline 6-cylinder that was to be the power plant. The Supra would go through 2 more generations of changes before in 1993 and the most ambitious Supra yet, the A80 was released in 1993. Built on a shortened chassis from the Lexus SC, the A80 Supras were packed with technology. When outfitted with the highest spec powertrain, the twin-turbo inline-6 cylinder mated to a 6-speed gearbox, could do 0-60 in as low as 4.6 seconds while covering a 1/4 mile in 13.1 seconds at 109 miles per hour. These were incredibly impressive performance numbers for the early '90s, and the public took notice. The Supra became a cultural icon and an automotive tuners fantasy with staggering horsepower numbers being made with relatively little modifications. The supra never fell out of fancy with the automotive crowd, always remaining a mainstay in movies and tuner culture. It wasn't until recently, when presumably the people that grew up fantasizing about them gained enough money to own one that exceptional examples became highly sought after. The A80 Supra remained in production here in the US until 1998 with other parts of the world being lucky enough to be still receiving cars through 2002.

This particular example, chassis number JT2JA82J0R0019725, is a 1994 Toyota Supra Twin-Turbo matted to a 6-Speed Manual in sport roof configuration. This car is an unmodified example with a clean CarFax that shows 75,435 miles from new. It is finished in a Black exterior over a light tan interior. When new, the car was leased out of a dealership in Indiana, and upon being returned off-lease in August of 1996, it was immediately snapped up by one of the top salesmen at the dealership. This car stayed with its second owner for the remainder of its life up until our acquisition a few months ago. The car has always been stock and remains as such to this day. A detailed CarFax is available in the documents section which outlines regular usage and a strict maintenance routine. It appears as if the bulk of the miles were put on the car in the first 7 years of its life with an indicated odometer reading of just over 60,000 in September of 2001. After this point, the car still saw strict service intervals, but usage appears to have been more leisurely given the current indicated mileage. When we acquired the car, we treated it to a full service totaling just shy of $4,000. This servicing included the following items:

As it sits now, this Supra is an unmodified, strong driver quality example. It shows some evidence of its mileage but remains in good overall cosmetic condition. With its fanatical maintenance regiment throughout its life and recent thorough servicing, this car is ready to be thoroughly driven and enjoyed. Toyota Supras represent the ultimate in modern collectability at the moment. Rarity directly correlates with collectability. With roughly 4,038 of the most desirable spec Supras (Twin Turbo, 6-Speed Models) sent to the US, we would venture to says that only a 1/3 of those examples are left in unmodified, clean condition. To have a car that has lived its whole life unmodified while also being lovingly maintained is a very rare occurrence in the JDM car world. This particular car checks all those boxes with it being a twin-turbo, sport roof, 6-speed model, that has always been stock. Because of that, this car represents an excellent opportunity to acquire a quickly appreciating 90's icon.

Included with the sale of this vehicle are the books, accessories, and correct leather protective front bra.

Note from the publisher:
Welcome to our collector car marketplace where we feature thousands of classified ad listings of vintage cars for sale. We hope that you will bookmark our site and visit often; our cars are updated every day. Furthermore we encourage you to subscribe to our mailing list so that we may periodically notify you of interesting classic cars that become available.
Home > Classic Cars For Sale > Toyota > Supra > 1994 Toyota Supra