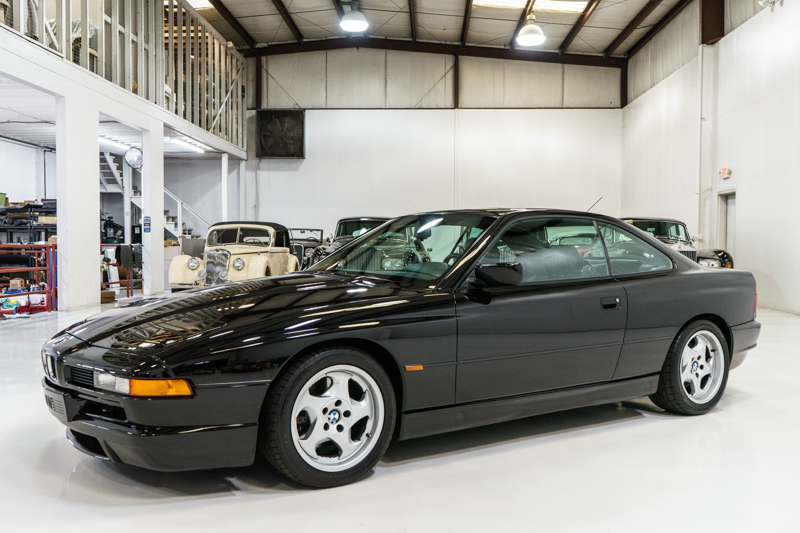 Price: USD $119,900
The top-of-the-line offering of the first-generation E31 BMW 8-Series, the 850 CSi offered numerous healthy and sporting upgrades over the 850 Ci. Initially developed to be a product of BMWs M division, the engine was based on that of the 850, but so substantially modified that BMW internally assigned it its own designation. Dubbed the S70B56, this 5.6-liter V-12 engine produced 375 BHP, 200 CCs larger, and 50 BHP more powerful than that of the 850 Ci. Other upgrades included a stiffer suspension with reduced ride height, distinctive aluminum star-shaped wheels, upgraded brakes, and a revised front and rear spoiler. While other 8-Series were fitted with an automatic transmission, the 850 CSi could only be had with a six-speed manual. Further adding to its desirability is its low production, with only 1,510 examples produced worldwide from 1992 to 1996, of which just 225 examples were destined for the US market. This example is one of only 81 US-specification examples for 1995, the final year the 850 CSi was offered in the United States. The magnificent BMW 850 CSi featured here is finished in stunning Schwarzer Black over impeccably kept gorgeous black leather interior. This late production, last year CSi was sold at Santa Monica BMW in November 1995, has been meticulously maintained since and just acquired from its second owner Oscar-Winning actress Holly Hunter! Fitted with nearly every available option including electric sunroof, premium sound system, onboard computer and more. We are proud to present what is certainly the best example of this highly desirable model to be found on the market today. Offered to the most demanding investor collector enthusiast who understands and appreciates this great up-and-coming classic. Classic carshave proven to be among the most resilient and rewarding investments in recent years with the Historic Automobile Group Index (HAGI) jumping 39% in 2013, 16% in 2014 and 17% in 2015 while posting gains of 467% over the last 10 years. Ready to make aninvestment that you can actually enjoy? Pleasecontactone of our expert sales consultants for more information. They will be happy to give you a complete walk-around, supply you with a more detailed description and answer any questions you may have. Buy with confidence.

Note from the publisher:
Welcome to our collector car marketplace where we feature thousands of classified ad listings of vintage cars for sale. We hope that you will bookmark our site and visit often; our cars are updated every day. Furthermore we encourage you to subscribe to our mailing list so that we may periodically notify you of interesting classic cars that become available.
Home > Classic Cars For Sale > BMW > 850CSi > 1995 BMW 850CSi