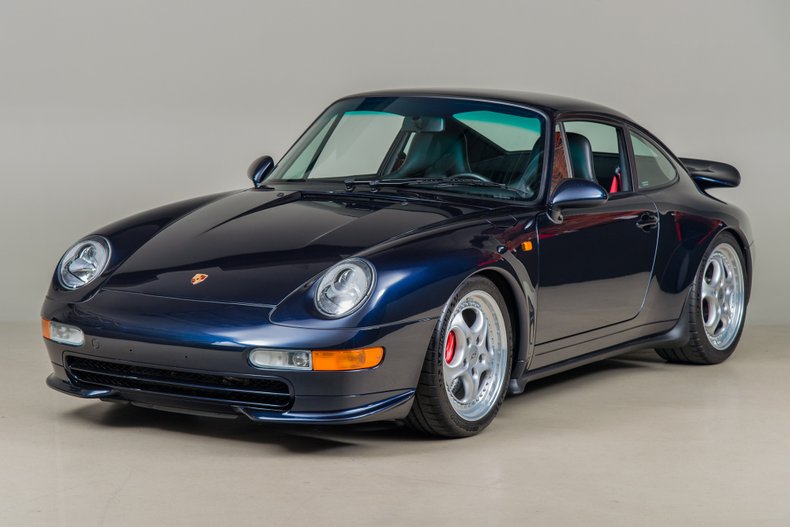 Price: Contact Seller for Price
1996 Porsche 993 Carrera RS View high resolution photos 100% original pristine concours-level condition One of 1,014 examples produced during 1995 and 1996 Switzerland-delivered car, just recently imported to the U.S. 100% original extremely rare Midnight Blue Metallic paint Documented maintenance Matching numbers with Porsche Certificate of Authenticity Includes books, tools, jack and spare 3.8-liter 300 horsepower air-cooled flat six engine 6-speed manual transmission Through the evolution of the 911, the cars found themselves continually added to and some believed that the purity of the 911 visually had been diluted. In 1993, Porsche introduced the Type 993: a return to basic principles, being recognizably a 911 but one in which all functions had been harmoniously integrated in a truly outstanding example of modern automotive styling. Then in 1995, Porsche introduced what would be the most powerful naturally aspirated 993 ever produced, a race-inspired 911 with handling to match the raw power: the Porsche 993 Carrera RS. Armed with an upgraded 300 horsepower 3.8 liter flat six mated to a 6-speed manual transmission, the Carrera RS was equipped with track-oriented suspension that gave an unparalleled driving experience, making the car an instant hit and drivers delight. Limited to only 1,014 examples and never offered to the U.S. for sale, the 993 Carrera RSs are now a collectors delight and are the last air-cooled Carrera RSs. This 993 Carrera RS, finished in Midnight Blue Metallic, was completed on May 16th, 1995. The 911 was optioned with equipment for Switzerland, a high amperage battery, air conditioning and a green graduated tinted windshield. The first owner would maintain the car per the factorys specifications, ensuring each service was carried out. The front of the car was covered by a mask since receiving the car, preventing rocks and debris from harming the rare Midnight Blue metallic paint. The Porsches maintenance log book indicates that the car was serviced regularly, with its first service on April 22nd of 1998 at 9,240 kilometers. The car would be serviced numerous times during his ownership, many of which were at the same service center. In 2003, Marcel, a personal friend of the owner, purchased the car from him in Zurich and would end up owning the car until just recently. Just as the first owner did before him, Marcel kept the 993 regularly serviced as indicated in the maintenance log book. Ever fastidious about the vehicle, Marcel kept the mask on the front of the car to prevent rock chips, evident in that the original paint doesnt have blemishes on the front of the car. Marcel owned multiple Porsches and kept the Carrera RS the longest due to it being his favorite, with his ownership spanning over almost 15 years. Arriving at Canepa shortly after being imported into the U.S., the car presents itself as an authentic original. After an extremely promising initial inspection, the car was put through the Canepa Difference process. The cars underside was hand washed to reveal the factory plating and suspension components in like-new condition. The car was then lightly polished with foam pads to add even more of a luster and depth to the Midnight Blue metallic paint. With factory finishes in extraordinary condition, the factory paintwork all original and confirmed via paint metering and with its interior with little signs of wear, this Carrera RS is an absolute gem. Pair its physical condition with its rarity, two owners and documented maintenance, this 993 Carrera RS represents an excellent value for both an investor and a driver, returning dividends for either purpose.

Note from the publisher:
Welcome to our collector car marketplace where we feature thousands of classified ad listings of vintage cars for sale. We hope that you will bookmark our site and visit often; our cars are updated every day. Furthermore we encourage you to subscribe to our mailing list so that we may periodically notify you of interesting classic cars that become available.
Home > Classic Cars For Sale > Porsche > 911 > 1996 Porsche 911