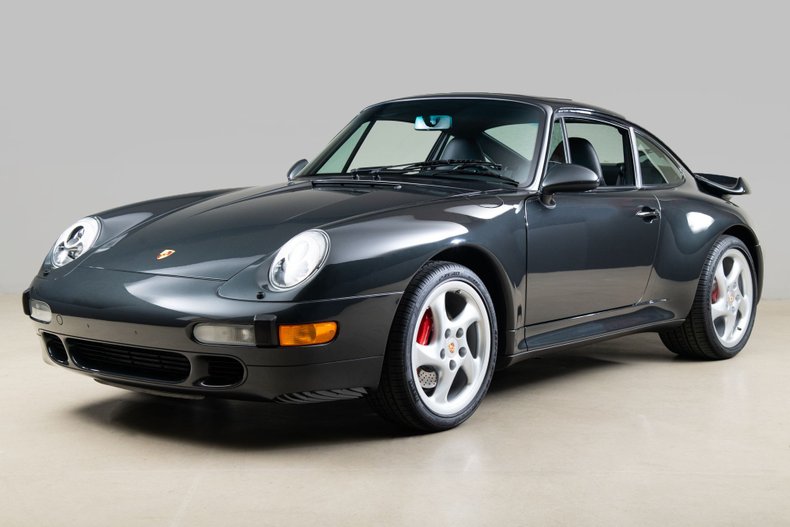 Price: Contact Seller for Price
Click here to view high resolution photos One owner from 1996 to 2020 1 of 1 Dark Gray Metallic paint to sample Original window sticker Includes owners manual, books, tools, compressor, and spare 408hp/398lb/ft torque twin-turbo 3.6-liter flat six engine, 6-speed manual transmission Includes service records The final and most advanced generation of the iconic air-cooled 911 Turbo The 993 Turbo, introduced in mid-1995 as a 1996, continued to hold the torch of the most powerful 911 variant while continuing to improve the breed as a whole. Among the new features on the 993 Turbo was an electronically controlled viscous coupling all-wheel drive system-something Porsche had not offered on a turbocharged model since the 959 and a system that greatly improved the performance of the Turbo. Under the engine lid-now topped with a sculpted spoiler tail with downturned edges-resided the 3.6 liter flat six fed by twin KKK K16 turbos, each featuring integrated wastegates and two air-to-air intercoolers. Combined with bigger brakes, fatter tires, a wide body and stance, specially designed Technologie-Rad cast alloy wheels with hollow spokes, the 993 Turbo was one of the fastest cars on the planet. With all four wheels tearing into the pavement, 0-60mph came in a face melting 3.7 seconds, 100mph ticked by in 5.7 seconds, and the forward progression continued until the speedometer had crossed 180mph. Beyond just going fast in a straight line though, the car could pull up to 1.00g on the skid pad and haul to a stop from 60mph in just 111 feet. In reviewing the 993 Turbo in June of 1995, Motor Trend magazine proclaimed, To beat this Stuttgart screamer into submission requires a force no less wieldy than the million-dollar 627-horsepower V-12 McLaren F1. This 993 Turbo was first purchased on May 15, 1996 by its first and longtime owner of the car. The owner picked up his Dark Gray Metallic paint to sample over black leather interior Turbo from Porsche, in San Diego, California. The original MSRP of this all-wheel drive twin-turbocharged 911 was $112,592.00, but Willard would pay a total of $131,541.00 out the door. Optioned with Dark Gray Metallic paint to sample, racing style sport seats with head restraint with Porsche crest, an AM/FM radio with CD player, cruise control, sunroof, metal door sill with insignia, leather frame for console switches, leather gear box tunnel, and wheel caps with the Porsche Crest. During the last 24 years, the owner took great care of the 993, with regular oil changes, as well as inspections done to make sure the car was in pristine condition. Based on the condition inside and out, it takes no stretch of the imagination that the car was stored for most of its life and impeccably maintained and cared for. Canepa recently acquired the 993 Turbo and upon arrival confirmed that it was a fantastic original example of a 993 Turbo. Starting the Canepa Difference process, the car was given a comprehensive mechanical inspection and appropriately serviced. The Dark Gray Metallic Turbo was also given a complete concours-level detailing which consisted of a cleaning of the chassis, interior detailing and a foam-pad polishing of the factory-original Dark Gray metallic paintwork. You can call it concours, show quality, or perfect preservation, this 993 Turbo checks every one of these boxes. It looks like a 1,500 mile car, no matter where you inspect it. - Bruce Canepa. With its original window sticker, manuals, tools, spare, and service records, this is a pristine example of an era-defining 911 that provided supercar performance with the civility of a luxury car.

This 1996 Porsche 993 Turbo was listed for sale on 2-14-21 13:19:18. The vehicle color is Dark Gray Metallic and VIN is WP0AC2991TS376188 . Kindly check ad for seller's location. Seller`s stock ID is canep6356. There are other Porsche cars currently listed for sale on our website. You may desire to see what other Porsche cars are selling for by visiting our Sales Data page.

Note from the publisher:
Welcome to our collector car marketplace where we feature thousands of classified ad listings of vintage cars for sale. We hope that you will bookmark our site and visit often; our cars are updated every day. Furthermore we encourage you to subscribe to our mailing list so that we may periodically notify you of interesting classic cars that become available.
Home > Classic Cars For Sale > Porsche > 993 Turbo > 1996 Porsche 993 Turbo