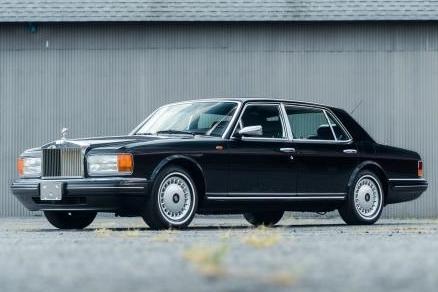 Introduced in 1980, the Silver Spirit, was the first in new line of RR models dubbed the SZ series and would form the basis for many of their models including the Flying Spur, Silver Dawn, Touring Limousine, Park Ward, and Bentley Mulsanne/Eight series. Most commonly found as either the Silver Spirit or the long wheel base Silver Spur, these cars were powered by a 6.75L V8 engine. The Silver Dawn was introduced in 1993 as a special edition Silver Spur III and contained additional options to improve ride quality and luxury including Electronic Traction Assistance System and rear seat heaters. A total of 237 Rolls Royce Silver Dawns were produced from 1995-1998 with 150 being left hand drive and 87 being right hand drive. The Silver Dawn was replaced, only in name, by the Silver Spur in 1999.

This particular Rolls-Royce Silver Dawn, Chassis # SCAZA11C2TCX57060, is a 1996 model year, during which only 39 were produced world-wide. It is finished in a stealthy Black with matching Black interior with red piping. According to the clean CARFAX report, the car spent much of its life in California, having been sold there new. Its first owner drove the car regularly, covering just over 20,000 miles in the two years they owned it. The second owner, also from California, drove the car more sparingly covering only 7,000 miles under 14 years of ownership. It appears they maintained the car well and there is record on the car fax of regular maintenance being done by British Motor Car Distributors of San Francisco, CA. The car changed hands again in 2013 but was driven just over 1,000 miles during the 2 year ownership. The 4'th owner, again a California resident, purchased it in 2015 and covered only 200 miles during their year long ownership before the car was sold again to another California resident in 2017. As the car currently sits, it is in fantastic shape both mechanically and physically. It's lifelong California heritage is backed up by the clean and dry nature of the exterior. This Rolls-Royce Silver Dawn needs nothing except a new owner to car for this loving maintained, rare example of Rolls-Royce exquisite craftsmanship. Included with the car are the original books, tools, and related accessories.

Note from the publisher:
Welcome to our collector car marketplace where we feature thousands of classified ad listings of vintage cars for sale. We hope that you will bookmark our site and visit often; our cars are updated every day. Furthermore we encourage you to subscribe to our mailing list so that we may periodically notify you of interesting classic cars that become available.
Home > Classic Cars For Sale > Rolls-Royce > Silver Dawn > 1996 Rolls-Royce Silver Dawn