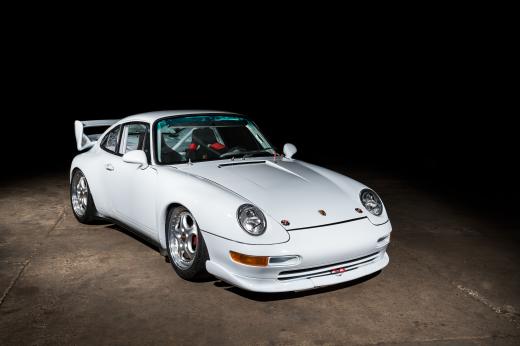 Chassis # WP0ZZZ99ZVS398091 is a 1997 Porsche 911 Cup 3.8 (also referred to as a Supercup) fitted with engine # 6403101 and is finished in Glacier White (L3AU). Per the cars ONS Wagenpass, it was delivered new to Dorint Hotels in April of 1997 and raced by Stefan Roitmayer for Team Herberth/Dorint Hotels as the #12 car. It competed in 10 Supercup races in 1997 and 9 races in 1998. In 1999, it was campaigned by Italian Team, MAC Racing, at the Daytona 24 Hours race piloted by drivers Morini/Scarpetta/Cattaneo/Tamburini/De Castro with the 66 number plate. It finished 7th in the GT3 class and 16th overall in a field of 78 entrants and was the only Supercup car competing against the venerable GT2 and RSRs. In cross-referencing the Italian Tech Passport on file, we presume it was then sold to Claudio Meddi who raced for MAC in a number of events for the team. Meddi/Borrett/Matte campaigned the car in the Italian GT Championship with numerous top 5 finishes. In 2002, it was imported into the United States by Freisinger Racing and was sold to a Mr. Walker shortly thereafter who competed in many Porsche Club Racing events with Log Books to show for it. In late 2003, it moved on to its current owner and consignor who has also participated in Porsche Club Racing Events.

Note from the publisher:
Welcome to our collector car marketplace where we feature thousands of classified ad listings of vintage cars for sale. We hope that you will bookmark our site and visit often; our cars are updated every day. Furthermore we encourage you to subscribe to our mailing list so that we may periodically notify you of interesting classic cars that become available.
Home > Classic Cars For Sale > Porsche > 911 > 1997 Porsche 911