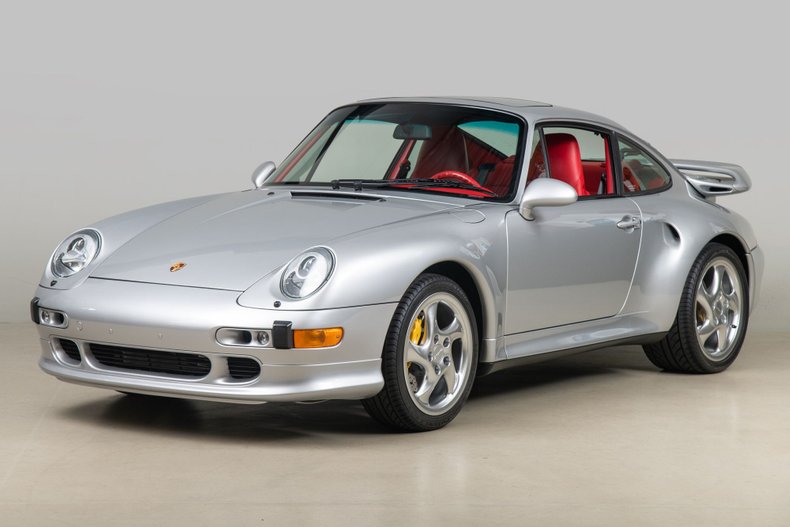 Price: Contact Seller for Price
Click here to view high resolution photos 1,416 original miles Absolute show-quality condition - 100% original inside and out Leather-Interior-to-Sample Cancan red full leather interior One of only 183 examples produced for the U.S. market Original MSRP of $157,709.00 in 1997 6-speed manual transmission, 424 horsepower air-cooled 3.6-liter twin turbo engine Original window sticker, order paperwork, books, tools, compressor, jack, and spare The final iteration of the air-cooled 911 Turbo The 993 Porsche 911, first introduced in 1995, is considered by many the last of the classic 911s. Being the final iteration of the revered air-cooled sports car, it was the most advanced and the highest quality 911 produced yet with massive performance and timeless styling. The Porsche 959 was a cutting-edge design that Porsche invested huge amounts of resources into, which eventually transferred into its future cars when the time came for the 993. When the Turbo was released in 1996, it employed twin turbocharging courtesy of the Porsche 959s developments, and was the first Turbo to use permanent all-wheel drive which also was a result from the Porsche 959 program. With its 3.6-liter engine with air-to-air intercoolers, performance skyrocketed to 400 horsepower which dropped its 0-60 time dramatically. Porsche then one upped themselves in 1997, the second-to-last year of the 993 production, by introducing the Turbo S. With only 183 cars produced for the U.S. market with a worldwide total of 345, the 993 Turbo S is one of rarest versions of the Turbo S lineage. The Turbo S gained a noticeable number of upgrades over the regular Turbo, including increased power, more carbon, a dazzling array of standard options, leather applied to almost every surface, along with special touches that remind you that were in a limited edition 911. The engine was uprated from 400hp to 424hp through new programming, Porsches special wishes department spent their time on wrapping almost every button and surface in leather, and special carbon fiber components add a bit of motorsport to the cabin. As with all 993s, an impeccable attention to detail was paid when being put together and they had some of the finest fit and finish of any sports car of the era. A special 4-pipe exhaust out of the rear, along with the larger rear wing and NACA-duct front bumper are all subtle cues to the passerby that this is no ordinary Turbo. This 1997 Porsche 911 Turbo S was ordered new by John Tilson of Santa Barbara, California. According to the original Porsche paperwork, he ordered the car on September 30th, 1996 from Circle Porsche of Long Beach, California. Due to the special nature of the Turbo S (along with the unique tailoring options that were often applied), there was an initial $20,000 non-refundable deposit paid in order to begin production. Tilson specd the car with Arctic Silver Metallic paint and the interior with Leather-Interior-to-Sample Cancan red. He received his car almost 9 months later on July 30th, 1997. The car would leave a pampered lifestyle for the entirety of its stay in Santa Barbara, where Tilson managed to put less than 885 miles on the odometer over 17 years. Stored inside and shielded from the elements, the cars original paint and interior remained as new. In 2015 the Turbo S was purchased by the 2nd owner who resided in Los Angeles, California. Joining a collection of other fine Porsches, the Turbo S remained as one of the crown jewels. Similar to its first owner, over the course of almost 5 years the 2nd owner added only 531 miles and took the car out sparingly. Garaged in a perfect environment, the car again remained in pristine, concours-like condition. Whenever a Turbo S arrives at Canepa it is usually a sight to behold. Extremely low production, a timeless factory design, paired with the time-cap

Note from the publisher:
Welcome to our collector car marketplace where we feature thousands of classified ad listings of vintage cars for sale. We hope that you will bookmark our site and visit often; our cars are updated every day. Furthermore we encourage you to subscribe to our mailing list so that we may periodically notify you of interesting classic cars that become available.
Home > Classic Cars For Sale > Porsche > 911 Turbo S > 1997 Porsche 911 Turbo S