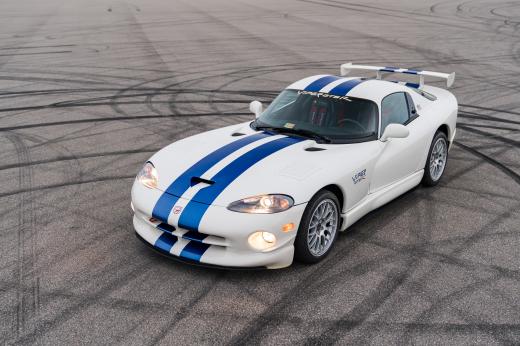 The example on offer here, chassis number 1BER69E4WV401030, is a 1998 Dodge Viper GTS GT2 Commemorative Edition, sometimes termed a GTSR although this moniker truthfully refers to the full-fledged racecar version. It is number 30 of only 100 cars produced to commemorate the vipers 1997 FIA GT2 class win. Currently, this Viper shows just over 10,000 miles and approximately 4 official owners from new according to the included clean CARFAX. It appears this car was sold new through North Carolina and wound up with its first owner who resided in Barrington, Illinois. The second owner, located in Kansas purchased the car in 2000 with approximately 5,066 miles on the odometer. They would go on to keep the car until 2015, adding around 4,000 miles to the odometer before selling the car in October of 2015 to its third owner in Virginia with around 9,800 miles. The car would remain with its third owner for only a year before being purchased by a dealer in Seaside California in March of 2016 with 9,946 miles on the odometer. The current owner and consignor purchased the car in 2018 and proceeded to have it thoroughly serviced and sorted by Woodhouse Chrysler of Blair, Nebraska. Full copies of these service records are available below in the documents section. Since its servicing, this 1998 Dodge Viper GT Commemorative Edition has seen minimal use and has been stored and cared for appropriately. As it sits today, this Viper remains in excellent condition both cosmetically and mechanically and is an extremely collectible example commemorating Americas return to endurance racing and the subsequent domination of the Vipers that followed.

Included with the sale of this car are the factory manuals, spare key, miniature car model, a clean CARFAX, and set code records.

Note from the publisher:
Welcome to our collector car marketplace where we feature thousands of classified ad listings of vintage cars for sale. We hope that you will bookmark our site and visit often; our cars are updated every day. Furthermore we encourage you to subscribe to our mailing list so that we may periodically notify you of interesting classic cars that become available.
Home > Classic Cars For Sale > Dodge > Viper > 1998 Dodge Viper