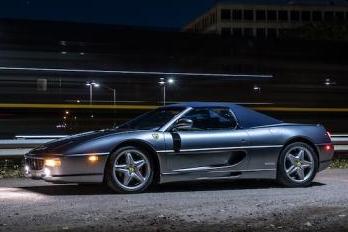 - Chassis # ZFFXR48A0X0116500
- Number 63 Of Only 100 U.S. Examples Produced
- Recent $20,000 Major Service And Less Than 300 Miles Since
- Numerous Factory Competitzione Performance And Styling Upgrades
- Perfect To Enjoy Or Show, A Guaranteed Hit At Any FCA Event

The Ferrari F355 was released in May of 1994 with the intentions of increasing both the performance and drivability of the 348 for which it replaced. The engine displacement was bumped to 3.5 liters and a new and radical 5-valve cylinder head were introduced, pushing horsepower to 375 and torque to 268 lb/ft at 6,0000 rpms. At first introduction, both a coupe and a Targa style GTS were available with the spyder version following in 1995. The F355 received great praise and sold very well through its 5 years of production. A total of 11,273 F355s were produced making it the most-produced Ferrari at the time, but was later surpassed by the 360 and later the F430.

In early 1999 Ferrari decided to create a limited edition send-off model before ending production of the F355. They dubbed this model the Serie Fiorano and decided to limit production to just 100 units, all of which were the spider body style and all of which were designated for the U.S. market. Ultimately though, 104 would be produced in total with 3 examples going to Europe and 1 ending up in South Africa. The goal of the Serie Fiorano was to increase performance to be more in line with the Challenge version while still keeping many of the creature comforts of the standard models. To accomplish this increase in performance Competitzione-derived Fiorano suspension package was fitted which provided a wider track, stiffer springs, and thicker anti-roll bars. Drilled and ventilated discs were fitted and paired with competition brake pads as well as a Competitzione-sourced steering rack. To differential, the model further Ferrari added a number of styling cues which included a numbered dash plaque, Challenge grills, shields, Carbon-fibre bits throughout the interior and Suede-covered steering wheel. Out of the 100 cars destined for the U.S. Market, 74 were equipped with the F1 transmission and only 26 had a 6-speed manual.

The example on offer here is a 1999 Ferrari F355 F1 Serie Fiorano Spyder, chassis number ZFFXR48A0XO116500, is number 63 of the 100 built for the U.S. market. It is finished in Grigio Titanio (3228) and is equipped with an F1 style transmission. Currently, the car has 26,989 original miles on the odometer and it has been well cared for throughout its life. The car has a clean CarFax, showing 6 total owners and well kept and cared for history. The car was originally delivered new to California with the first owner taking delivery on 8/20/1999. The car remained in California till 6/25/2001 before being sold to its second owner in New Hampshire showing just over 4,000 miles on the odometer. The car remained in New Hampshire with the owner driving the car regularly and servicing it as necessary. In 2007 the F355 wound up back in California with its 3rd owner and 15,100 miles. It was sold to its 4th owner, who also resided in California in 2009 showing 18,128 miles. this owner drove and serviced the car regularly, with the mileage showing approximately 23,731 at the time of its sale to its 5th owner on 05/10/2011 who lived in Connecticut. on 07/16/2015 the car was sold to its current owner and registered in New Jersey with 26,672 miles on the odometer. As the car currently sits, it has had a recent $20,000 major mechanical servicing the details of which can be seen in the documents section below. This F355 is a rare vehicle which currently needs nothing and is immediately ready to be enjoyed and shown.

This 1999 Ferrari 355 Spider was listed for sale on 2-8-19 12:15:34. The vehicle color is Grigio Titanio and VIN is not available . Kindly check ad for seller's location. Seller`s stock ID is 19SG1964281601. There are other Ferrari cars currently listed for sale on our website. You may desire to see what other Ferrari cars are selling for by visiting our Sales Data page.