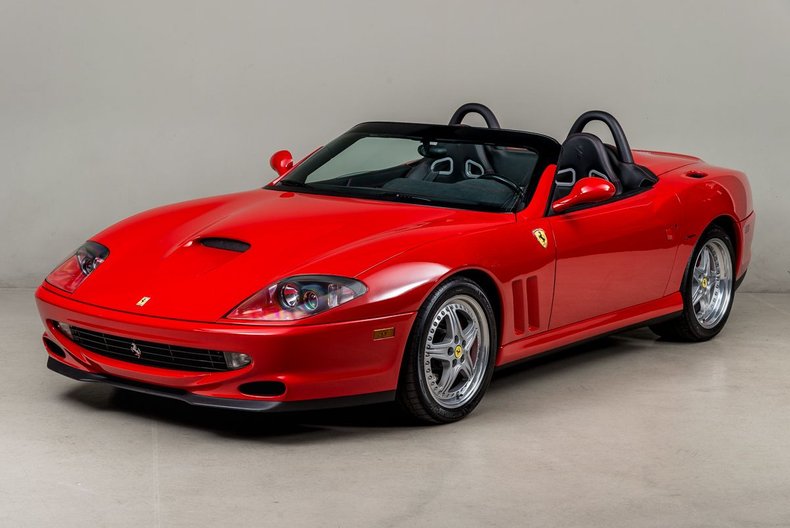 Click here to view high resolution photos 6-Speed Manual transmission 1,890 miles Front Engined V12 producing 485hp and 420 lb/ft torque Number 379 of 448 Limited Production Unveiled at the Paris Auto Show in 2000, the Ferrari 550 Barchetta Pininfarina was so named to commemorate the 70th anniversary of the Italian car design firm and coachbuilder founded by Battista Pinin Farina, and the 50th anniversary of the two companys joint endeavors. With a name that harkens to the sports racers of the 60s, the 550 Barchetta Pininfarina was specifically designed to be reminiscent of legendary Ferrari road race stars such as the 166 MM, the 250 GT California, and the 365 GTS4 Daytona. The aim, in fact, was to create an open-top front-engined 12-cylinder interpretation of Ferraris purest and most extreme sports cars. It was a deliberate and provocative departure from the rest of the range, and as such, it was made available only as a limited edition of just 448 units. Each car was numbered, and its number displayed on a special in-car plaque signed by Sergio Pininfarina. From every angle the Ferrari 550 Barchetta is exciting, and features the tasteful addition of Carrozzeria Scaglietti equipment as standard. The most striking aspect of the Barchetta is its open top, sporting a traditional barchetta-style cut to the windscreen (around 4 inches lower than the enclosed 550 Maranello), with a body-colored finish to the lower section of the surround. The spectacular example on offer here is number 379 of 448 made, and was originally sold at Ferrari of Central Florida in December of 2001 to Scott Rosen of Casselberry, Florida. The red Barchetta would remain in Florida until being purchased by a collector in 2011, who replaced the tires, and commissioned a major service in January of 2016, which included new timing belts. Notably, this 550 Barchetta has accumulated a mere 1,890 miles on the odometer in the nearly twenty years since initial delivery, and still presents in like-new condition. Since arriving at Canepa the 550 Barchetta Pininfarina received a thorough inspection, and was serviced, including the installation of new fuel pumps and trunk lid gas struts, the recharging of the air conditioning system, and a full concours-level show detail. Now ready for a new caretaker, this very special, limited edition Ferrari is prepared for both driving enjoyment, and show-field display.