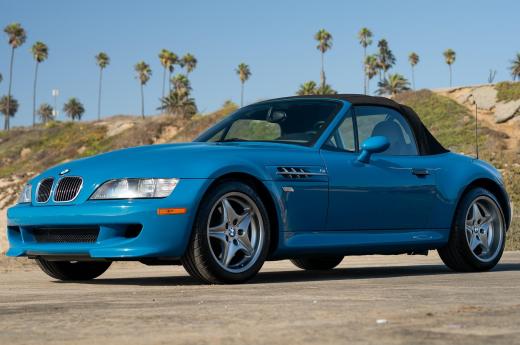 BMW began design work on the now acclaimed Z3 roadster all the way back in 1991 and would go on to begin producing the car starting in September of 1995. The Z3 was the first BMW offering to be manufactured outside of Germany, being built solely in Greer, South Carolina. Never ones to be satisfied with the standard, the M version of the Z3 roadster was released in 1996 and featured different front and rear bumpers, gills, tanks, and mirrors. The M-Roadster was initially fitted with the S52 for the American market, making 240 bhp and 240 lb/ft of torque. A total of 2,180 cars were produced with this power plant and in October 2001 BMW upgraded the engine to the S54 which was found in the E46 M3. This is where the little roadsters truly shine, now packing 315 bhp and 252 lb/ft of torque for the American market derivatives. A total of 1,112 cars fitted with the S54 engine were built for worldwide delivery and these remain the peak of desirability when it comes to the M-Roadster and M-Coupe derivatives.

The example on offer here, chassis number 5UMCL93422LJ82059, is a 2002 BMW M-Roadster and is one of 78 M-Roadsters produced in the stunning Laguna Seca Blue color. It is an all original paint example as confirmed by paint meter readings. It is fitted, from the factory, with the highly desirable S54 motor which provided better power output over the S52 fitted to the earlier cars. The interior of the car is finished in Back and Gray 2-tone Leather and also remains in excellent original condition. This M-Roadster comes with a clean Carfax that shows 2 previous owners before it was bought by the current consigner. It remains in all-stock condition with the exception of the added aftermarket chrome style roll hoops (originals included) and a Dinan strut tower bar in the engine bay. The M-Roadster was delivered new to its first owner through Crevier BMW in Santa Ana, California, who then moved the car to Colorado in 2002 with 5,274 miles on the odometer. This BMW would remain with the first owner until November of 2011 when it was sold to its second owner in Georgia with 17,445 miles on the odometer. The second owner drove the car sparingly over the next 3 years before it was sold to its 3rd, and current owner, in August of 2014 with 19,058 miles on the odometer. The current owner lives in Los Angeles, California and has also driven the car sparingly while staying up on all service needed to keep this M-Roadster in top shape. Currently, the car shows 20,521 original miles on the odometer and remains in excellent shape both cosmetically and mechanically. The only cosmetic blemishes present are very minor and are things you would expect to see on an original paint example such as minor stone chips in the nose area from normal use. This BMW M-Roadster is low mileage and a very original example, with all VIN stickers present in their correct locations and still featuring its factory applied paint as verified by the included paint meter readings. Most recent servicing includes a full fluids change, completed in May of 2018 and a new battery which was replaced in June of 2019. It remains in stock form, has been cared for in a loving manner and includes current California complaint SMOG certificate. Included in the documents section for this car is a recent PPI completed by a well respected LA-based BMW shop which shows a very clean example needing nothing but new wipers and a serpentine belt, both of which will be replaced before the sale of this vehicle. In today's world, the BMW M-Roadster represents a highly useable and very analog example of a small roadster fitted with a big engine. These cars have seen a brief rise in their collectability and in our opinion there remains plenty of more room for growth, especially in models finished in desirable colors and fitted with the powerful S54 engine like this particular example.

Special Note: If the buyer of this vehicle resides in the state of California, the vanity license plate LSB will be included in the sale of this vehicle.

Note from the publisher:
Welcome to our collector car marketplace where we feature thousands of classified ad listings of vintage cars for sale. We hope that you will bookmark our site and visit often; our cars are updated every day. Furthermore we encourage you to subscribe to our mailing list so that we may periodically notify you of interesting classic cars that become available.
Home > Classic Cars For Sale > BMW > M Roadster > 2002 BMW M Roadster