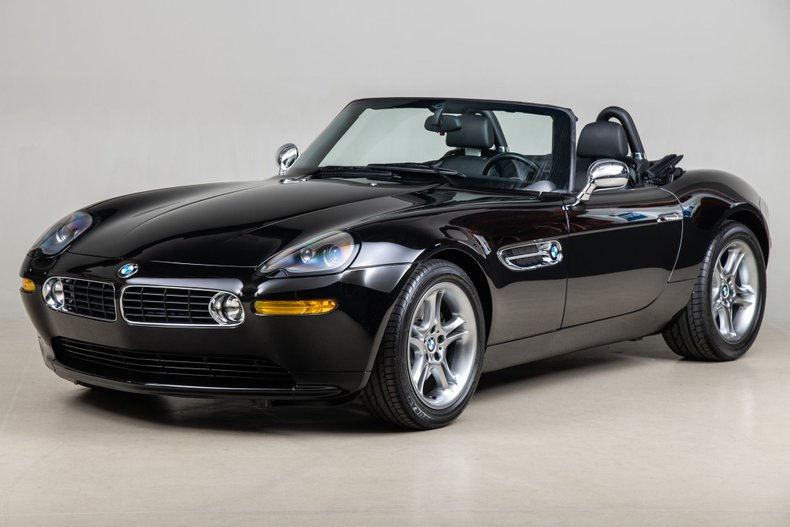 Price: Contact Seller for Price
View high resolution photos One owner 15,930 original miles Absolute Concours Condition Rare black-over-black specification Factory-original black paint finish and original black interior Documented service since new 6-speed manual transmission, 5.0-liter V8 engine with 394hp/368 lb./ft of torque BMW factory wheels refinished in Canepa Liquid Metal Silver paint finish Includes original window sticker, hard top, books, tools, and first aid kit The BMW Z8, or E52, is a limited-production roadster that was built for a total of 4 years from 1999 to 2003. Based on the popular Z07 concept car from 1997, the Z8 was designed by Henrik Fisker with the interior drafted by Scott Lempert. A total of 2,543 Z8s were built for the North America market. With a futuristic car came futuristic practices, such as an all-aluminum chassis and body (a first for BMW). Powering the Bavarian roadster was the highly-praised 5.0-liter 32-valve V8 engine that produced 394 horsepower and 368 lb./ft of torque. Internally known as the S62 engine, built by BMW Motorsport, it was also shared with the universally-loved E39 M5. The Z8s powerplant was mounted to BMWs classic 6-speed manual transmission as the only transmission option. The engine was moved rearwards behind the front axle, yielding a perfect 50/50 weight distribution for better handling. The cars consistently outperformed contemporary benchmarks like the Ferrari 360 Modena in three categories: acceleration, handling, and braking. To this day the design of the BMW Z8 has stood the test of time, pairing a futuristic-yet-retro style with uncompromised performance with impeccable driving characteristics that make it a top pick as a drivers car. This black BMW Z8 was first imported to the U.S. to Century West BMW in North Hollywood, California and arrived in July of 2002. Optioned with a jet-black exterior, all leather nappa black interior, with an anthracite headliner, and phone kit, the BMW retailed for a commanding $132,745.00 in 2002. The first and only owner purchased the car in June of 2003 and added it to his collection. He owned the car from new, adding all 15,930 miles now on the odometer. He ensured the car remained in impeccable condition, keeping the car garaged and serviced throughout his ownership. Driven sparingly, the Z8s current condition both inside and out is a testament to the owners fastidious attention to detail in keeping it in the best condition possible. In 2018 the car received a major service from BMW of Monterey. During this service, the engine oil and filter were changed, new tires mounted, new battery added, an alignment, and a new starter was installed, with a grand total of $4,423.03. When the Z8 arrived at Canepa, the car immediately drew eyes to itself. One of the most successful modern retro cars designed in the past two decades, the BMW Z8 stands above many other lesser designs with elegant styling, engaging driver dynamics, and an intoxicating exhaust note from the 5.0-liter V8. Not waiting a moment, the Z8 was immediately entered into Canepas system to receive the full Canepa Difference process. After a lengthy mechanical inspection was performed, the car went through Canepas rigorous detailing regimen. When detailing an original car such as this, careful precautions are taken to ensure that all of the factory surfaces are cared for and gently cleaned. The engine bay, underbody, chassis, and interior are all extensively cleaned by hand using the utmost attention to detail that original cars deserve. The factory-original jet-black paintwork was polished with a lengthy and fastidious 7-stage process to reveal a deep luster that looks better than new. Finishing up the look of the Z8 was refinishing the factory BMW wheels in Canepas signature Liquid Metal Silver color, tying in with the rest of the chrome for a cle

Note from the publisher:
Welcome to our collector car marketplace where we feature thousands of classified ad listings of vintage cars for sale. We hope that you will bookmark our site and visit often; our cars are updated every day. Furthermore we encourage you to subscribe to our mailing list so that we may periodically notify you of interesting classic cars that become available.
Home > Classic Cars For Sale > BMW > Z8 > 2002 BMW Z8