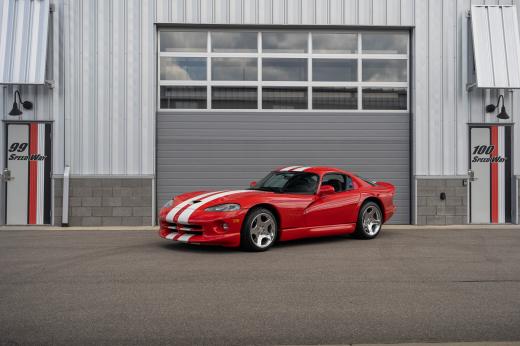 The year 2002 marked the end of a historic era for the second generation of Vipers that spanned seven years. Originally debuted in 1996, the GTS introduced many new design features while upping power figures from its 8.0L V10 to 450 hp. While its outward appears may seem relatively unchanged from the SR I Generation, the new GTS was indeed very different. Rather than side pipes, the exhaust was routed to the rear center of the car and it came standard with power windows, power locks, alarm system, and airbags; features that were absent from the first SR I generation. One of its most profound design queues was the Shelby Daytona inspired double bubble roofline which from a pragmatic functionality standpoint served to accommodate extra head clearance for the driver and passenger areas should either of them be wearing a helmet. However, this double bubble roofline traces its roots back even further to the Italian Coachbuilder, Zagato, who originally penned the lines which have become a signature feature of their firms designs. With influential design elements taken from successful, beautiful historic designs, it is no wonder the Viper GTS was so popular. The Viper GTS was not just aesthetically pleasing; it was also functional with a wildly successful racing career that launched this American-built car onto a foreign stage. When French-based Team ORECA opted to adopted the Viper racing program in 1997. A turning point was realized and achievements of historic proportions were on the horizon.

This particular example, chassis 1B3ER69E62V102701, is a 2002 Dodge Viper GTS Final Edition number 51 of 360 produced. It has traveled are mere 9,700 miles from new and remains in excellent, unmodified original condition as were most of these highly sought after, instant collectibles. They were the last of an immensely successful production run of second-generation Vipers but more importantly, they pay homage to the dominance of Viper in professional racing.

Viper Team ORECA went on to win the ALMS Championship for three years in a row from 1998 to 2000. The last big hurrah came in 2000 when Karl Wendlinger, Olivier Beretta, and Dominique Dupuy won the 24hrs of Le Mans in the Number 51, Factory-Backed, Chrysler Viper GTS R Chassis C31. This is the same car we are currently offering for sale at LBILimited.com alongside this Final Edition #51. During Chassis C31s triumphant Le Mans win, it ran with 51 number plates. It was only fitting that we offer the commemorative Final Edition with build #51 of 360 alongside the Le Mans Winning ORECA Viper #51. A fantastic pair and a true delight to view together in our Pontiac, Michigan Showroom. The Final Edition was built in a limited fashion and finished in the same Viper Red with dual Stone White racing stripes as the successful Team ORECA Vipers wore. This Final Edition comes from a collection and is offered with its Window Sticker, unused spare, and clean Carfax.

Note from the publisher:
Welcome to our collector car marketplace where we feature thousands of classified ad listings of vintage cars for sale. We hope that you will bookmark our site and visit often; our cars are updated every day. Furthermore we encourage you to subscribe to our mailing list so that we may periodically notify you of interesting classic cars that become available.
Home > Classic Cars For Sale > Dodge > Viper > 2002 Dodge Viper