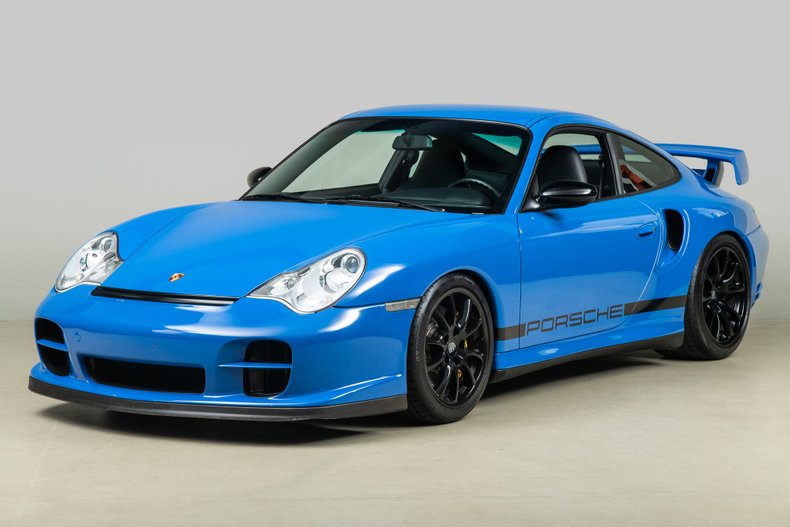 Click here to view high resolution photos Ordered by and previously owned by Americas most famous celebrity Porsche collector One of only 303 examples ever made for the US market between 2002 and 2005 The only example ever produced in paint-to-sample Adriatic Blue Special options by Porsche Exclusive Programme/Special Wishes department Highly original both inside and out Original MSRP of $198,115.00 in 2001 456 horsepower, 457lb-ft of torque, rear wheel drive 6-speed manual transmission, 3.6-liter twin-turbocharged flat six engine Includes books, tools, and compressor OPTIONS: 446 - Wheel Caps with Colored Crest 71 - Black Leather w/Black belts 98 Non-Metallic Paint to Sample 998 Natural Leather interior E73 - Carbon Interior Package (carbon center console, shifter, hand brake, vent and radio surrounds, sill plates) M6A - Black Mats Porsche Lettering Porsche Exclusive Program/Special Wishes X71 - Aluminum Instrument Dials XMA - A/B Pillar/Headliner in leather XSA - Sport Seats Painted to Match XSC - Porsche Crest in Headrest Porsches famous GT2 moniker was first introduced to the world in the form of Porsche 993, dubbed the 911 GT2. These cars were initially built in order to satisfy the requirements in order to be eligible for the GT2 racing class. These special 993s featured widened fenders and a large rear wing with air scoops in the actual wing to improve cooling. Producing around 424hp, these air-cooled rear wheel-drive monsters were only offered with a 6-speed manual transmission and were incredibly fast. Without effort, they became incredibly popular. Upon arrival of the 996 in 1999, Porsche began developing the 911 GT2 which took more than two years. This time around, Porsche decided to not homologate the GT2 and focused on making it the best road car it could be. Featuring a new 3.6-liter twin-turbocharged engine (now water cooled), the rear wheel-drive GT2 produced 456 horsepower and 457lb-ft of torque. The rest of the car varied significantly compared to its lesser 911 models offered by Porsche, with wider fenders, a more aggressive shaped nose, and large rear wing. Heralded as the widow maker, with its massive power going through only the rear wheels and a lack of electronic driving aids, the GT2 was the car you wanted if you wanted your spine to tingle and remind you of your own mortality. Available only with a 6-speed manual transmission, this car was made for the real drivers. With only 303 examples built for the U.S. market, it was an extremely rare car to find and see. In context, over 600 Carrera GTs were produced and sold in the U.S. and the Carrera GT is considered a supercar. This special 2002 Porsche 911 GT2 was ordered new by one of the most prominent Porsche collectors in America who also happens to be one of the most successful comedians ever. Specd new in Paint-to-Sample Adriatic Blue (the only 996 GT2 to ever wear said color), it is a stunning example to behold. A number of other options included its interior in natural leather in black, the carbon interior package, black mats with Porsche lettering, and a host of Porsche Exclusive Programme/Special Wishes including: Aluminum instrument dials, A/B pillar and headliner in leather, Sport Seats backs painted in Adriatic Blue, and the Porsche crest on the headrests. In total, the original window sticker price was $198,115.00 in 2001. That is the equivalent of $286,980.00 in 2020 money. The first owner kept the car for a few years, driving it sparingly according to vehicle reports. The car made its way through a few owners before finding a new owner in Texas, who went on to own the car for almost 10 years. During this time period is when most of the current mileage was added to the Porsche. In early 2019 the car was purchased by a Los Angeles collector who knew the first owne

Note from the publisher:
Welcome to our collector car marketplace where we feature thousands of classified ad listings of vintage cars for sale. We hope that you will bookmark our site and visit often; our cars are updated every day. Furthermore we encourage you to subscribe to our mailing list so that we may periodically notify you of interesting classic cars that become available.
Home > Classic Cars For Sale > Porsche > 911 GT2 > 2002 Porsche 911 GT2