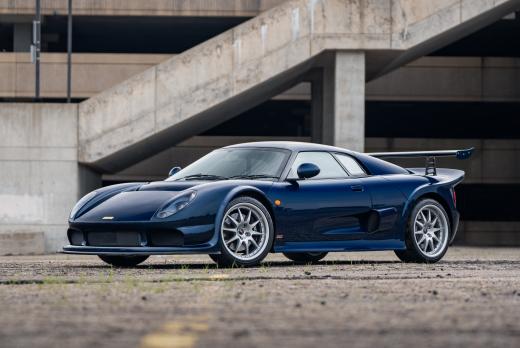 - Chassis # NUS0121
- 2,499 Miles Indicated From New
- Tasteful Mechanical Upgrades Completed
Noble Automotive Ltd. first opened its doors in 1999 in Leicester England. Its founder Lee Noble wanted to produce a more affordable rear engine, rear-wheel drive sports car. Their first offering was the M10 which had slightly quirky styling but backed it up with solid performance numbers. In 2004 Noble released the M400 which was a more track-oriented version of the M10 and M12. With 425 BHP and a curb weight of just 2337 lbs, the M400 was able to achieve a power-to-weight ratio of 400 bhp/ton, which is where the name comes from. Power for the M400 came from heavily worked twin-turbo 3.0L V6 Ford Duratec engine. This massaged power plant was able to propel the little Nobel 0-60 MPH in 3.2 seconds and onto a top speed of 187 MPH. Manufacturing rights for Noble cars were eventually sold to 1G racing in Ohio. When Road & Track Magazine tested the Noble M400, they drew the conclusion that, the Noble is one of the best sports cars in the world. Although it never received the accolades that some of its more famous supercar brethren achieved, the Noble M400 remains a rare and desirable way to enter supercar ownership without breaking the bank.

This particular Noble M400, Factory VIN NUS0121 was finished in Indigo Blue metallic paint with a black interior. It was upgraded with Factory Air Conditioning at the time of construction. The cabin is superbly finished with Alcantara upholstery covering everything from the carbon fiber sport seats to the headlining, console and even the built-in roll bar and it features Willans racing harnesses in red and a GPS/DVD ready Pioneer/Infinity audio system. This car currently has approximately 2,500 miles and is in excellent condition. The current owner took extremely good care of the M400 on offer here and not much maintenance has been needed as the car currently has such low mileage but all basic things such as oil changes were done. The car has been upgraded with a TurboHoses R&D air intake an upgraded exhaust, blow off valve and a larger intercooler, all of which have been installed perfectly and complement this cars performance and appearance. This particular M400 has seen minimal usage and it truly shows as the car remains in impeccable condition. It represents true value in the marketplace for an exceptional driving experience that is a fraction of what it would cost in modern supercar form.

This 2006 Noble M400 was listed for sale on 9-27-19 11:07:06. The vehicle color is Blue and VIN is not available . Kindly check ad for seller's location. Seller`s stock ID is 19SG432558391. There are other Noble cars currently listed for sale on our website. You may desire to see what other Noble cars are selling for by visiting our Sales Data page.

Note from the publisher:
Welcome to our collector car marketplace where we feature thousands of classified ad listings of vintage cars for sale. We hope that you will bookmark our site and visit often; our cars are updated every day. Furthermore we encourage you to subscribe to our mailing list so that we may periodically notify you of interesting classic cars that become available.
Home > Classic Cars For Sale > Noble > M400 > 2006 Noble M400