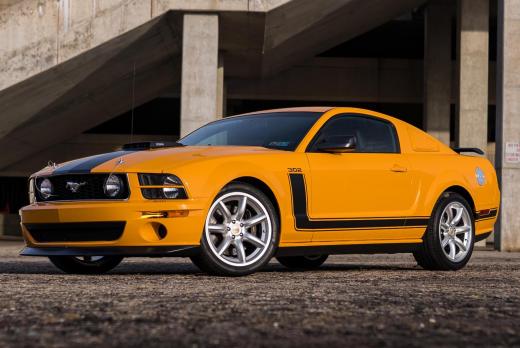 Parnelli Jones is a man who made a name for himself during the rough and tumble days of racing from the 60s through the early 70s. This was an era where cars ran at blisteringly fast speeds but safety was an afterthought; where you didnt even think about crashing because your chance of surviving was so incredibly slim that it would be better to be thrown from the car. Remarkably, Jones made it out of this era alive and relatively unscathed and lived a life surrounded by racing and speed.

The true passion for speed could never die in a man like Parnelli, and in his older age, he was looking around for a modern vehicle to satisfy his itch for speed and performance. He opened discussions with the notorious Ford tuning company Saleen. Working together, Parnelli and Steve Saleen took a stock Ford Mustang GT and turned it into a whole new animal. The engine increased in displacement to 302 ci and was completely reworked and rebuilt to allow it to rev more freely as well as to make 400 hp at 6,000 RPM and 390 lb/ft of torque at 4,000 RPM. The transmission was kept as the stock 5-speed unit while the exhaust was switched out for a high-performance unit. The suspension was upgraded to match the performance of the engine and the front brakes were switched out to 14-inch slotted and vented rotors to provide ample stopping power. Visually, the Parnelli Jones edition Saleen cars were built to mimic the 1970 Ford Boos 302 that Parnelli raced in the Trans-Am series at the time. This included the iconic grabber orange paint, boss 302 graphics, and custom Saleen Minilite inspired wheels, as well as a functional shaker-style hood scoop among other things. The interior received a number of Saleen badges as well as custom Black and Grabber Orange seats to compliment the exterior of the car. A total of 500 of these unique vehicles were produced by Saleen, with Parnelli acquiring 2 of the 500 for his personal use. The list price for these heavily upgraded specials was $59,015 with delivery MSRP coming in at a little over $60,0000. All 500 units were sold through Saleen with ease and today these cars remain as wonderful tributes to a bygone era as well as providing incredible all-around performance for the money.

The example on offer here, chassis number 1ZVFT82H075264901, is a 2007 Ford Mustang Saleen Parnelli Jones Edition. It is number 038 of just 500 special editions ever produced and has a clean CarFax showing 2 total owners, the original purchaser, and the current consignor. This particular car was sold new out of Chapman Ford of Egg Harbor Township, New Jersey to its first owner on January 13, 2007. It appears that this owner resided in the New Jersey area and drove the Mustang very sparingly, adding just 892 miles before the car shows up as dealer inventory at Porter Ford Mitsubishi in Newark Delaware on August 25, 2009. From here, the second owner and current consignor purchased the car on January 8, 2010, with just 1,050 miles on the odometer. Since the time of purchase, the car has been driven sparingly and maintained regularly by the Ford dealership at Town & Country Motors in Ligonier, PA. This Parnelli Jones edition Mustang currently has just 5,838 miles on the odometer and remains in fantastic condition throughout. Today these Saleen Parnelli Jones Mustangs represent an extremely well-done tribute to a bygone era and provide massive amounts of performance for the money.

Included in the sale of this vehicle are the original window sticker, factory books, as well as the magnetic number 15 vehicle decals that originally came with the car.

This 2007 Ford Saleen Mustang was listed for sale on 12-18-19 08:57:57. The vehicle color is Grabber Orange and VIN is not available . Kindly check ad for seller's location. Seller`s stock ID is 19SG485570000. There are other Ford cars currently listed for sale on our website. You may desire to see what other Ford cars are selling for by visiting our Sales Data page.

Note from the publisher:
Welcome to our collector car marketplace where we feature thousands of classified ad listings of vintage cars for sale. We hope that you will bookmark our site and visit often; our cars are updated every day. Furthermore we encourage you to subscribe to our mailing list so that we may periodically notify you of interesting classic cars that become available.
Home > Classic Cars For Sale > Ford > Saleen Mustang > 2007 Ford Saleen Mustang