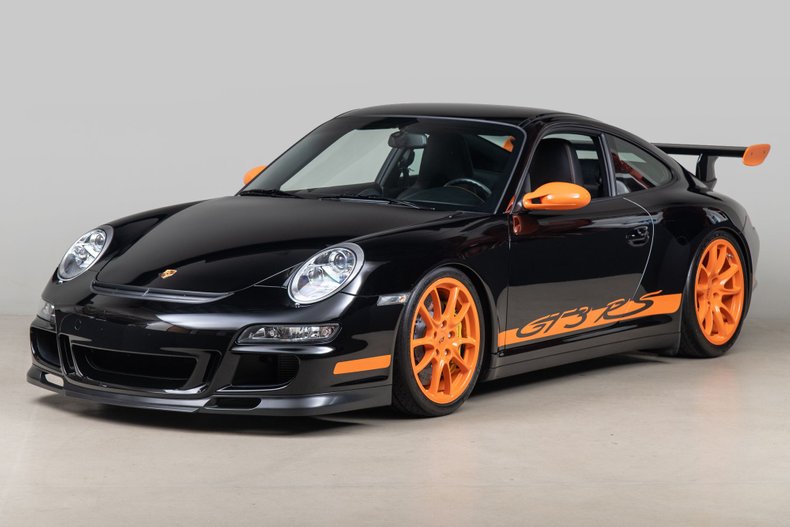 Price: Contact Seller for Price
Click here to view high resolution photos 1 owner, California car since new --- 6,029 miles 997.1 GT3 RS, one of only 410 produced and sold in the U.S. Documented and long service history Substantial Porsche factory options list Sports exhaust system (original muffler included) Black w/orange accents, black leather/Alcantara interior 6-speed manual transmission, 3.6-liter flat six engine with 415 horsepower Factory options: Dashboard Stitching Deviated Color, Door Stitching Deviated Color, Door Handle Stitching Deviated Color, Deviated Stitching Side Central Console, Rear Side Panel Deviated Stitching, Seat Stitch Deviating Clr. GT3, Ceramic Composite Brakes PCCB, Leather Sport Steering Wheel, Chrono Package Plus, Black Full Leather, Floor Mats in Interior Color, PCM 2.1 w/Extended Navigation, Bi-Xenon Headlamp Package, Red Taillights The GT3 RS moniker is one of the most recognizable titles to ever be bestowed onto the 911 platform, signaling a high-performance nature that is considered, by enthusiasts and drivers alike, the gold standard for handling dynamics. Upon announcement of the 997 GT3 RS, expectations were high. The previous generation GT3 RS in the 996 guise was considered a masterpiece, with sharp handling and an extremely analog connection to the road that gave pure driving enjoyment. Being that Porsche is excellent at evolving their cars, the 997 GT3 RS did not disappoint. With more power, a wider body, and a larger wing for more downforce, the 997 GT3 RS improved numerous aspects over the previous generation. Tipping the scales at a feather-weight 3,020 pounds, paired with a high-revving naturally aspirated flat six engine with 415 horsepower and a bolt action-like 6-speed manual transmission, the GT3 RS created a winning and memorable combination. Lauded by drivers for being one of the last pure and analog driving experiences amongst modern Porsche 911s, the 997 generation GT3 RS holds a special place in many hearts and garages. This 2008 Porsche 911 GT3 RS was delivered to Stevens Creek Porsche of Santa Clara, California in March of 2008. Specd in black w/orange accents over a black leather/Alcantara interior, this GT3 RS had numerous special wishes and requests. Orange deviated stitching throughout the car ties in the exterior orange elements with the interior, making this a memorable and unique GT3 RS. Porsche Carbon Ceramic Brakes were optioned, along with a sport steering wheel in leather, Chrono package plus, PCM 2.1 w/extended navigation, Bi-Xenon headlights, and red tail lights. The car was purchased by its first and only owner, located in Southern California. The GT3 RS was transported down to Southern California where it was maintained and serviced regularly at Porsche Newport Beach and Fletcher Jones Motorcars in Newport Beach. The owner drove the car sparingly, adding only 6,029 miles to the odometer during his 11-year tenure with his Porsche. Hard to miss in any scenario, the black and orange GT3 RS arrived at Canepa and was immediately inspected. With a 6,029-mile car, the car presents as though it was just lightly used and enjoyed. The factory original black paint is stunning, and the interior looks as if it was only visited only a few times by its owner. Each and every collector car that comes to Canepa is put through and extensive and diligent process called the Canepa Difference. This includes a major and comprehensive mechanical inspection where all systems are checked and serviced as necessary. They also receive an award-winning concours-level detailing, a thorough cleaning of each and every surface that ensures that every car is a sight to behold. Finishing off with a foam-pad-only polish to enhance the paint finish, each and every car is a perfect example and a personification of Bruce Canepas impeccable attention to detail. Now r

Note from the publisher:
Welcome to our collector car marketplace where we feature thousands of classified ad listings of vintage cars for sale. We hope that you will bookmark our site and visit often; our cars are updated every day. Furthermore we encourage you to subscribe to our mailing list so that we may periodically notify you of interesting classic cars that become available.
Home > Classic Cars For Sale > Porsche > 911 GT3 RS > 2008 Porsche 911 GT3 RS