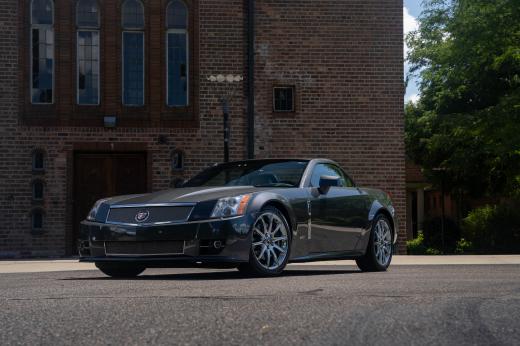 The XLR project first began under the then general manager of Cadillac, John Smith. Intended as a statement of brand character, the original concept for the Evoq was built by Metalcrafters of California in 1998. The Cadillac Evoq concept was later unveiled at the 1999 Detroit Auto Show. The Evoq then took an additional four years to become a reality, and the final product was announced at the 2003 North American International Auto Show as the XLR. At the 2005 Super Bowl, MVP Deion Branch was awarded his very own XLR. The XLR was a powerful cruiser with a retractable hard top and Bulgari designed interior elements. Sharing the underpinnings of Chevys Corvette (GM Y platform), the XLR was built alongside it in Bowling Green, Kentucky.The Cadillac XLR was marketed as a luxury roadster and offered numerous features as options like, Bulgari-branded instrument panel cluster, OnStar, High Intensity Discharge (HID) front headlamps, perforated luxury leather-trimmed seating surfaces with power-adjustable, heated and cooled bucket seats with a drivers memory system, luxury carpeted floor mats with embroidered XLR logos, premium aluminum-alloy wheels, and wood interior trim. The XLR also had magneto-rheological shock absorber fluid for increased ride control. It was powered by a 4.6L Northstar V8 which produced 300 horsepower and was mated to either a 5 or 6 speed automatic.

The XLR-V was first announced during the 2005 Super Bowl in a commercial produced by Cadillac. The XLR V featured a supercharged version of the previously used 4.6L Northstar V8 which produced 443 horsepower and 414 lb. ft of torque with four intercoolers built into the intake manifold and mated to a six speed automatic. In addition the car featured larger brakes from the Z51 Corvette and 19 inch wheels standard. Although it was advertised as a Luxury Roadster, the XLR-V was no slouch with a 0 60 time of 4.6 seconds, a quarter mile of 13 seconds, and an electronically limited top speed of 155 mph. The XLR-V was produced from 2006 to the end of XLR production in 2009. A total of approximately 2,188 XLR-Vs rolled off the Bowling Green assembly line over the 4 years of production and in 2009, Cadillac only made 239 XLR-Vs making this particular model quite rare.

The XLR-V on offer here, chassis #1G6YX36D195600684 is a 2009 Cadillac XLR-V with 28,270 miles. This XLR-V is finished in Cyber Gray over cashmere with all the interior alcantara deleted. This is believed to be the only one of the 239 produced in 2009 finished this way, making it a 1 of 1 example. This example shows a clean CarFax with only 2 owners from new and showing regular service and maintenance. The car was originally sold at Williamson Cadillac in Miami Florida where it was serviced for the first 6,000 miles before moving with the owner to Fort Lauderdale, Florida. Regular servicing is shown until the car was sold in late 2012 with approximately 24,992 miles on the odometer. The second owner purchased the car in early 2013 and the CarFax shows regular maintenance with minimal use showing 26,579 miles on the odometer when it was serviced on 08/06/2017. As it sits today, this XLR-V shows just 28,270 miles. It remains in excellent condition both cosmetically and mechanical, thanks in large part to the consistent servicing shown on the CarFax. With only 239 examples produced in 2009, the XLR-V is rare, and the fact that this one is finished in such a unique way ensures that it will be a quickly appreciating modern collectible fit for any collection surrounding interesting American made cars.

Included in the sale of this vehicle are the user manuals as well as a clean CarFax.

Note from the publisher:
Welcome to our collector car marketplace where we feature thousands of classified ad listings of vintage cars for sale. We hope that you will bookmark our site and visit often; our cars are updated every day. Furthermore we encourage you to subscribe to our mailing list so that we may periodically notify you of interesting classic cars that become available.
Home > Classic Cars For Sale > Cadillac > XLR-V > 2009 Cadillac XLR-V