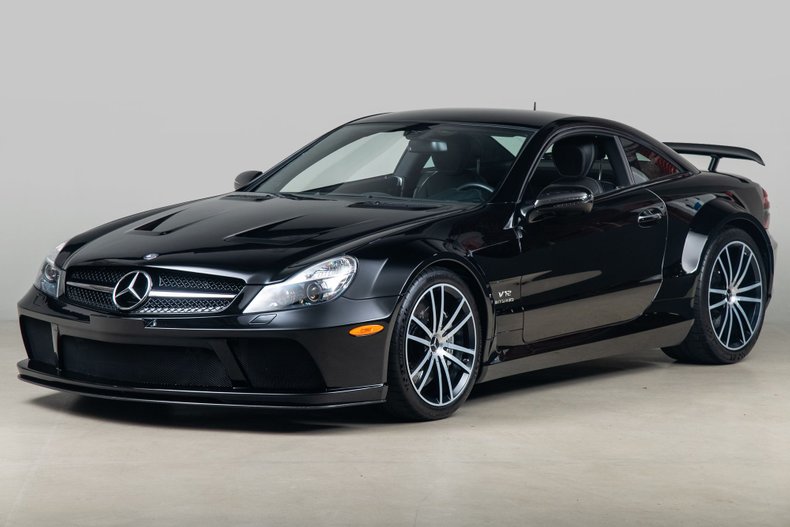 The coolest, baddest, and most stealthy Mercedes-Benz AMG ever made, with the performance to back it up. Bruce Canepa

Click here to view high resolution photos One of 175 produced for the United States 661hp/738 lb-ft of torque, hand-built 6.0-liter twin-turbocharged V12 engine Carbon-fiber bodywork, AMG limited slip differential, AMG adjustable suspension AMG Speedshift Plus 5-speed automatic transmission with variable modes Factory MSRP of $304,350.00 in 2009 6,838 miles - Extensively serviced per clear Carfax report Includes owners manuals, original window sticker, and tools Mercedes-Benz built a reputation creating well-built and thoroughly-engineered automobiles, creating icons throughout time. While Mercedes was working through new designs and producing cars, AMG was quietly (and sometimes not so quietly) taking some of these designs and applying their sense of insanity to them. More power, increased handling, higher performance, and muscular styling created a cult following for the tuning house, eventually being absorbed by Mercedes-Benz and becoming their in-house performance department. AMG is known for creating icons such as the AMG Hammer, CLK-GTR, and the CLK DTM, all of which were known for their insane power and handling prowess. However, when asked what is their favorite 2-door road-going AMG car, this elusive and under-the-radar choice always appears for many: the Mercedes-Benz SL65 AMG, Black Series. If giving a Mercedes to AMG is turning the dial to 10, then the Black Series moniker is jamming the dial even farther. The Black Series designation is saved for only the most exclusive and maximum performance models, and the SL65 AMG Black Series is one of the most famous. Sinister from every angle, the hand-built 6.0-liter V12 twin-turbocharged engine produces 661hp and an earth-turning 738 lb-ft of torque. Maximizing the mechanical grip, engineers widened the car which is obviously apparent from the bulging fender flares. With body panels made from carbon fiber, a fixed roof for rigidity and weight savings, the performance behemoth isnt just a one-trick pony. Swathed in leather, the interior of the SL65 AMG Black Series is as luxurious as youd expect, with comfortable seats equipped with massagers and excellent outward visibility. Electronically limited to 199mph, 0-60 miles an hour in 3.6 seconds, all while in the luxury known by Mercedes-Benz, the SL65 AMG Black Series has performance to spare while keeping the occupants in comfort. With only 175 examples created for the U.S. market, seeing an SL65 AMG Black Series is a rare sight. Experiencing one is an even greater feat, with your brain not being able to comprehend how a Mercedes-Benz SL could accelerate, brake, and handle with such ferocity. That is the way of AMG. This SL65 AMG Black Series was first delivered to Murray Motor Imports of Denver, Colorado. Specd in black with a black AMG exclusive leather interior, SL65 AMG Black Series cars were heavily optioned from the factory with little-to-no extra options available. Options included AMG adjustable suspension, 19 and 20 AMG wheels, High Performance Brakes, AMG Sport Exhaust, AMG Limited Slip Differential, AMG Carbon Fiber Trunk Lid Spoiler, 12-way adjustable massaging seats, AMG Exclusive leather, Carbon fiber interior trim, 10-speaker Harmon Kardon sound system, Bi-Xenon headlights with active curve illumination, and numerous others. All this power, performance, and style didnt come inexpensively, with the original window sticker showing an MSRP of $304,350.00 in 2009! The car was first sold on July 3rd, 2009. The first owner kept the car maintained at Murray Motor Imports during their ownership as noted on the Carfax report, and on July 9th of 2015 the car was serviced at Mercedes-Benz of Westminster. The car throughout its time in Colorado

Note from the publisher:
Welcome to our collector car marketplace where we feature thousands of classified ad listings of vintage cars for sale. We hope that you will bookmark our site and visit often; our cars are updated every day. Furthermore we encourage you to subscribe to our mailing list so that we may periodically notify you of interesting classic cars that become available.
Home > Classic Cars For Sale > Mercedes-Benz > SL65 AMG Black Series > 2009 Mercedes-Benz SL65 AMG Black Series