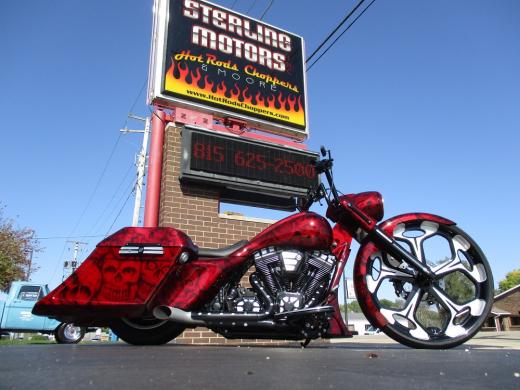 Mileage: 8,700
This sick creation was designed and built by Kenne Settle of The Cycle Ward and was featured in the July 2015 issue of Hot Bike. The bike is called Carte Blanche for the simple reason the customer that hired Kenne for the build gave him complete freedom to design and build this bike as he saw fit. His only requirements were that it had to have a 30 front rim, a crazy loud sound system and that it would be reliable enough to ride anywhere. They started with a 2012 FLHR with just over 8,000 miles on it. The first thing that needed to be done was to add the HHI short neck which was done with no seems and all internal wiring for an extremely clean look. The stock 103 engine was lightly modified with a bigger cam, a less restrictive air filter, a tuner and it sounds just plain nasty ripping through its 2 into 1 performance exhaust system. It has almost every black and contrast option available from Performance Machine which includes the 30 front rim, the front end, engine covers, tranny covers, foot controls, hand controls, mirrors and more. It has a complete Dirty Bird body consisting of the fenders, nacelle, tanks, side covers and stretched bags. It also has front and rear air ride as well as a full custom sound system consisting of (4) Crescendo 6.5 mid-range speakers (4) Crescendo super tweeters, a Rockford Fosgate subwoofer, two amps and a BT stereo mounted in one of the saddle bags. We could go on and on about all of the upgrades but we will let the pix speak for themselves. We do need to give some attention to the paint job as it is just breathtaking. It is a gorgeous Candy Apple Red with airbrushed skull graphics from top to bottom. All said and done the build cost on this bike was almost $80,000. Since then it has been ridden less than 1,000 miles and is still in excellent condition. As you can see we have priced this beauty aggressively so if you like what you see you better call us before it is too late!

Note from the publisher:
Welcome to our collector car marketplace where we feature thousands of classified ad listings of vintage cars for sale. We hope that you will bookmark our site and visit often; our cars are updated every day. Furthermore we encourage you to subscribe to our mailing list so that we may periodically notify you of interesting classic cars that become available.
Home > Classic Cars For Sale > Harley-Davidson > Road King > 2012 Harley-Davidson Road King