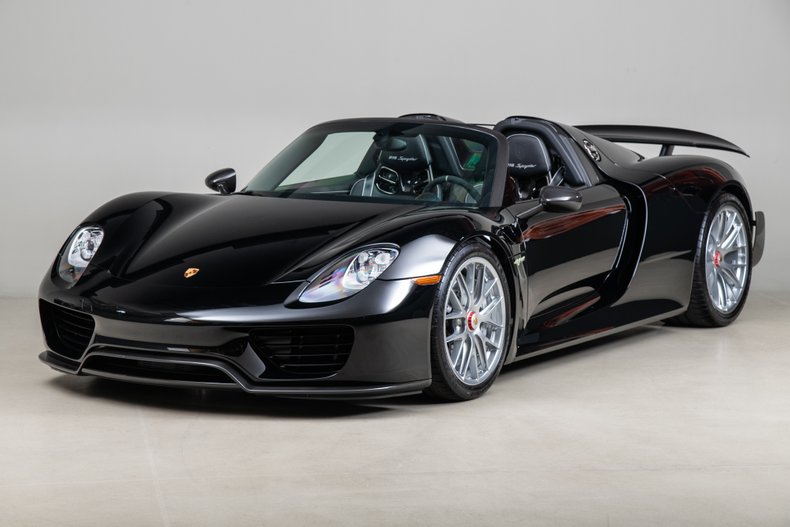 Price: Contact Seller for Price
2015 Porsche 918 Spyder View high resolution photos Equipped with $84,000 Weissach Package option 1 owner, 628 miles since new One of 918 examples ever produced Black over Onyx Black leather interior Equipped with front axle lift system Porsches most technologically advanced road car to date By 2010, Porsche was already regarded as a sports car powerhouse. Having developed and released not one but two world-renowned supercars, the Porsche 959 and Carrera GT, rumors began circling the automotive landscape that the German company was planning their next endeavor. Those rumors were confirmed upon the release of the concept car at the 80th Geneva Motor Show in March of 2010: The Porsche 918 Spyder. Porsche would take three years before unveiling the production model at the 2013 Frankfurt Motor Show in September, but Porsches introduction was clear: their hyper car was here. Boasting a marvel of technological wizardry, the 918 Spyder was Porsches answer to the ever-evolving and skyrocketing performance standards. The 918 Spyder uses a 4.6-liter V8 engine based on the same underpinnings as the RS Spyder LeMans Prototype, but the real news was the supplemental drivetrain. Porsche added two large electric motors to boost performance: one to drive the front axle and another to supplement the engine. This all-wheel drive hybrid drivetrain yielded an astounding 875 horsepower and 944lb/ft of torque, good for a 0-60 time of 2.4 seconds. With Porsche producing only 918 examples of this hybrid hyper car, it is an exceedingly rare car that is packed with an immense amount of performance wrapped in an easy-to-use package. This Porsche 918 Spyder was completed on November 1st, 2014 and was optioned in Black over an Onyx Black leather interior. This particular example was optioned with the $84,000 Weissach Package option, which emphasized weight savings through a few particular options and added a few aerodynamic tweaks. Approximately 25% of production were optioned with this factory upgrade, making them extremely rare. Some of these options included magnesium motorsport wheels, a lighter brake design, titanium bolts for the chassis, along with special rear carbon fiber spoilers. These weight savings removed close to 100 pounds from the chassis, a considerable amount since the hybrid powertrain is not what many call lightweight. Ordered with the must-have $10,500 Front axle lift system option, this allows the 918 to travel on regular roads with ease. With silver leather piping and silver accents to the black seatbelts, the entire car is subtle and flies under the radar (perfect for avoiding unwanted attention). The only owner of this 918 took delivery of the car and immediately applied a comprehensive clear protective wrap to the car to ensure the black paint stayed in pristine condition. During his ownership he would only add 628 miles to the odometer, evident in how every part of the car presents in as-new condition. When the car arrived at Canepa, there was very little to address due to its well-cared-for history and lack of mileage. With only needing a simple cleaning to the interior, the entire car presents as though you were picking it up from a Porsche showroom. With a subtle exterior and interior that belies its true raw and technologically-advanced nature, this 2015 Porsche 918 Spyder with the Weissach Package is Porsches ultimate street fighter disguised in plain sight.

Note from the publisher:
Welcome to our collector car marketplace where we feature thousands of classified ad listings of vintage cars for sale. We hope that you will bookmark our site and visit often; our cars are updated every day. Furthermore we encourage you to subscribe to our mailing list so that we may periodically notify you of interesting classic cars that become available.
Home > Classic Cars For Sale > Porsche > 918 > 2015 Porsche 918