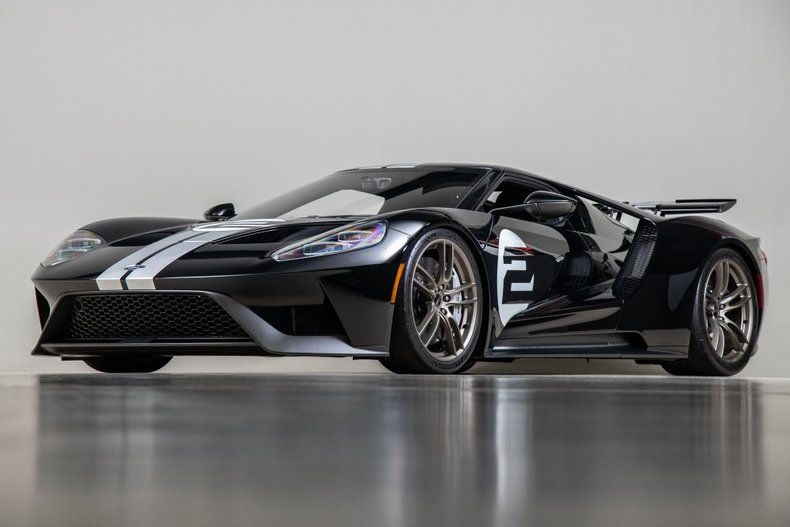 Price: Contact Seller for Price
2017 Ford GT Heritage Edition View high resolution photos Heritage Ford GT owned by Motorsport Hall of Fame member Chip Ganassi First year, 25th Ford GT built, one of the limited edition Heritage cars in 2017 Special limited-edition celebrating Fords first 24 Hours of Le Mans victory in 1966 647 horsepower, 550lb/ft torque 3.5-liter V6 engine, 7-speed dual-clutch transmission Same Ford GT platform that won at 24 Hours of Le Mans, 24 Hours of Daytona, two-time 2nd place overall in IMSA GTLM class In the world of motorsport, it is easy to be forgotten among the hordes of drivers and teams, and pulling off the act of becoming legendary is often a hard-won battle. However, two names in motorsport are known for their sheer determination and have gone down in the record books: The Ford GT and Chip Ganassi. One was an unlikely racecar designed to beat the likes of Ferrari in 1966 at the 24 Hours of Le Mans, the other is a Motorsports Hall of Fame member for his exploits in the motorsports world and as a championship team owner. Both started with something to prove, with both proving to the competition that they were not to be meddled with and cementing themselves in motorsports history. With both of their legacies intertwined more recently with Chip Ganassi Racing chosen by Ford to run their new Ford GT in IMSA and select European races such as the 24 Hours of Le Mans, the two have quite easily made a name for themselves together and separately. The Ford GT story follows a 50+ year timeline. The original Ford GT40s were built to break Ferraris seemingly unshakable grip on the 24 Hours of Le Mans race. In the second year they raced, 1966, they took 1st, 2nd, and 3rd place at Le Mans, justly proving that Ford, an American manufacturer, could run with the European contenders and beat them. The Ford GT name would lay dormant for almost 40 years, seeing its revival in 2004 with the new Ford GT road cars. These were developed to be street cars first, comfortable and easier to drive, with 550 horsepower on tap. Fast forward to 2015s Frankfurt Motor Show, and the all-new Ford GT is revealed. It is announced that the Ford GT is set to go racing in both IMSA and the World Sports Car series, spearheaded by the Chip Ganassi Racing team. Chip Ganassi is the only team owner to have won the Indianapolis 500, the Daytona 500, the Brickyard 400, the Daytona 24 Hours, the 12 hours of Sebring and the 24 Hours of Le Mans six of the biggest races in the world. Chip Ganassi racing has a record of 8 wins at the 24 Hours of Daytona, five wins at the Indianapolis 500 and 12 IndyCar championships in addition to numerous other wins. Much like the fateful race at Le Mans 50 years ago with Fords triumph, Fords GT under Chip Ganassi Racing took to 1st in class at the 24 Hours of Lemans in 2016, cementing the modern car in legend as its predecessor had done before it. The new 2017 Ford GT application process saw a flooding of applicants who wanted to purchase the new car, despite only 1,000 being announced to be built. With over 6,500 applications to date, many went home empty handed. However, Chip being the principal owner and CEO of Chip Ganassi Racing who represented and supported the Ford GTs in racing received the 25th car off the assembly line. Optioned with the $50,000 Heritage 66 Series package, adding the following: Black leather seats with pillowed inserts, Shadow Black paint with Silver stripes, white #2 badge on the front hood/door graphics and forged aluminum alloy wheels, Exterior exposed carbon fiber package with Gold IP/Seat X-brace finishers and shifters, Black leather steering wheel, IP, Pillars and headliner, matte carbon fiber registers, door sills and console, blue seatbelts and pull strap webbing, and a white #2 interior door accent graphics with Gold IP badge. Approximately 50 cars in 2017 were optioned with