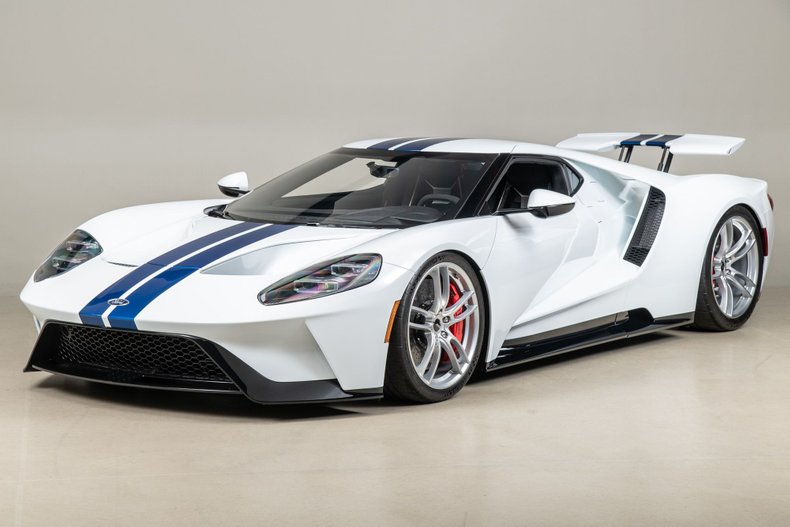 Price: Contact Seller for Price
2017 Ford GT View high resolution photos 43rd Ford GT built, like-new condition with 1,343 miles One of only 138 examples built in 2017 647 horsepower, 550lb/ft torque 3.5-liter V6 engine, Getrag 7-speed dual-clutch transmission Carbon fiber monocoque structure Same Ford GT platform that won at 24 Hours of Le Mans and the 24 Hours of Daytona X-pel paint protection film Includes new in-box Akrapovic titanium exhaust, GT sales kit, window sticker, GT car covers The Ford GT story follows a 50+ year timeline. The original Ford GT40s were built to break Ferraris seemingly unshakable grip on the 24 Hours of Le Mans race. In the second year they raced, 1966, they took 1st, 2nd, and 3rd place at Le Mans, justly proving that Ford, an American manufacturer, could run with the European contenders and beat them. The Ford GT name would lay dormant for almost 40 years, seeing its revival in 2004 with the new Ford GT road cars. These were developed to be street cars first, comfortable and easier to drive, with 550 horsepower on tap. Fast forward to 2015s Frankfurt Motor Show, and the all-new Ford GT is revealed. It is announced that the Ford GT is set to go racing in both IMSA and the World Sports Car series, spearheaded by the Chip Ganassi Racing team. Much like the fateful race at Le Mans 50 years ago with Fords triumph, Fords GT under Chip Ganassi Racing took to 1st in class at the 24 Hours of Lemans in 2016, cementing the modern car in legend as its predecessor had done before it. The new 2017 Ford GT application process saw a flooding of applicants who wanted to get their hands on one of the new cars, despite only 1,000 being announced to be built initially. With over 6,500 applications to date, many went home empty handed only to dream what it would be like to own Fords most advanced supercar. The owner of this car, however, was one of the lucky few. Securing the 43rd build slot for himself, he chose a stunning specification of white over black, along with Ford blue racing stripes along the top of the car. He chose this specific specification to match his 2005 Ford GT, which is also white with blue stripes. The 6-point racing harness was also ordered from the factory. He ordered this Ford GT with the optional Akrapovic titanium exhaust system, but at the time of assembly the exhaust system was not available. Instead of holding up production, he opted to purchase the titanium exhaust once it was available, and kept the Akrapovic system in the box instead of installing it. Before driving, he had X-pel clear paint protection film installed on the front bumper and fenders, along with lower parts of the car to avoid rock chips. He also installed fine screens in front of the air exit point behind the front wheels underneath both doors, a common upgrade to avoid debris from being ejected out the sides. Enjoying the car for a few years, he primarily kept his car stored indoors and only added 1,343 miles to the GT during his ownership. Included with this Ford GT is the original Ford GT sales kit, factory metal print of the GT, both keys, its window sticker, the titanium exhaust in its original box, and both car covers. Boasting advanced technology throughout the car making it extremely quick, the Ford GT saw numerous improvements since the last edition of the GT was available to the public over 14 years ago. A trick suspension system that changes geometry depending on if the car is lowered or not, increasing the level of handling in track mode. The Eco-boost twin-turbocharged 3.5-liter V6 engine is a mega powerplant, pushing out 647 horsepower and 550lb/ft of torque paired with a Getrag 7-speed dual clutch transmission. This equates to a 3.2-second sprint to 60 miles per hour and a top speed of 216 miles per hour. A lightweight carbon fiber monocoque and aluminum substructure helps keep the weight down, a mere 3