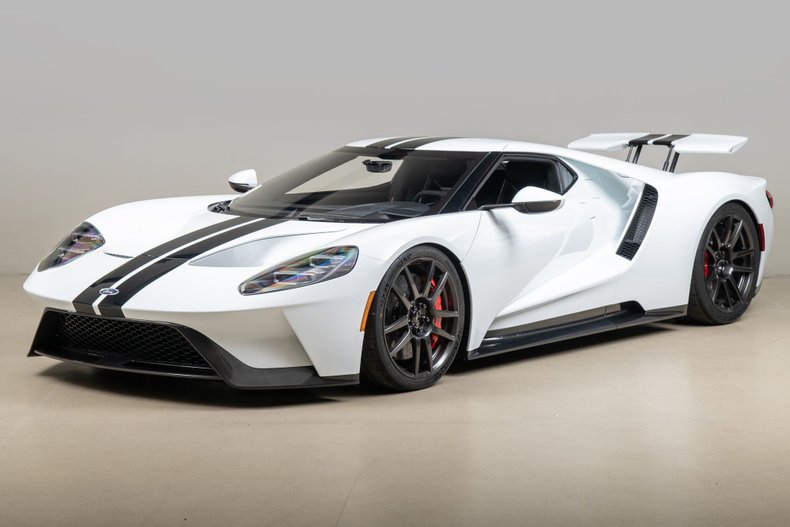 Price: Contact Seller for Price
2017 Ford GT Serial number: H068 View high resolution photos Owned by Joey Hand, Chip Ganassi Ford GTLM winning team driver of the 2016 24 Hours of Le Mans and 2017 24 Hours of Daytona 15 miles new condition Dark Energy interior upgrade, carbon fiber wheels, exterior carbon fiber package Has all items as delivered - Ford GT sample box, original window sticker, build photos, and promotional materials Based on the 2016 24 Hours of Le Mans-winning Ford GTLM race car platform 647 horsepower twin-turbocharged 3.5-liter V6 engine, 7-speed dual clutch transmission The Ford GT40 legacy is a story that follows a 50+ year timeline. The original Ford GT40s were built to break Ferraris seemingly unshakable grip on the 24 Hours of Le Mans race. In 1966, they took 1st, 2nd, and 3rd place at Le Mans justly proving that Ford, an American manufacturer, could run with the European contenders and beat them. The Ford GT40 would continue to dominate Le Mans for the next 3 years, leaving a 4-year streak between 1966 and 1969. After the final race the Ford GT name would lay dormant for almost 40 years, seeing its revival in 2004 with the new Ford GT road cars. These were developed to be street cars first, comfortable and easier to drive, with 550 horsepower on tap. Fast forward to the 2015 Detroit Auto Show, and the all-new Ford GT is revealed. It was later announced in the summer of 2015 that the Ford GT is set to go racing in both IMSA and the World Sports Car series, spearheaded by the Chip Ganassi Racing team. Much like the fateful race at Le Mans over 50 years ago with Fords triumph, Fords GT under Chip Ganassi Racing would go on to take 1st in class at the 24 Hours of Le Mans in 2016, cementing the modern car in legend as its predecessor had done before it. Joey Hand is an American racing driver who raced for the BMW Factory for 10 years and the only American to ever race full time in Europes DTM series. Having won the 24 Hours of Daytona overall in 2011 with Chip Ganassi Racing, the American Le Mans Series GT class in 2011, and two-time 12 Hour of Sebring GT class winner, Joeys racing variety made him a valuable asset on the Ford GTLM team. While at the 2014 Petit Le Mans, Joey was running down the pit lane and saw Chip Ganassi, screeching to a halt and talked with him. Chip invited him to come race for his team, wanting him to be a part of a new Ford program but couldnt tell him the details until later. In 2015 during the 24 Hours of Daytona race, the Chip Ganassi Racing prototype was using the drivetrain for the future Ford GTLM race car, which Joey drove with Scott Pruett. The fanatical amount of testing led to the future Ford GTLM being an extremely reliable racer. Fords plan (and full intent) was to win the 24 Hours of Le Mans in 2016. There was no holding back, no compromises, just sheer determination to win the legendary race 50 years after the first Ford GT40 crossed the finish line. The new Ford GT race cars were built from blank sheets of paper, a clean slate. Designed to be a race car first to ensure no compromises, Ford applied for a special allowance from the FIA saying that Ford will build road cars after the race car has started racing, an unusual occurrence in motorsport. Ford Chip Ganassi Racing traveled to Le Mans for the first time, using cars that just started racing in early 2016. Joey was one of the 3 team drivers of the 24 Hours of Le Mans-winning Ford GTLM. Despite having some technical issues in the early morning and a penalty, in the last four hours of the race Hand managed to chase down the Ferrari with a 12-second lead, later making the definitive pass that the Ford Chip Ganassi team would retain for the remainder of the race. Along with co-drivers Dirk Mller and Sbastian Bourdais, the trio won the race 50 years after the first GT40 crossed the 24 Hou