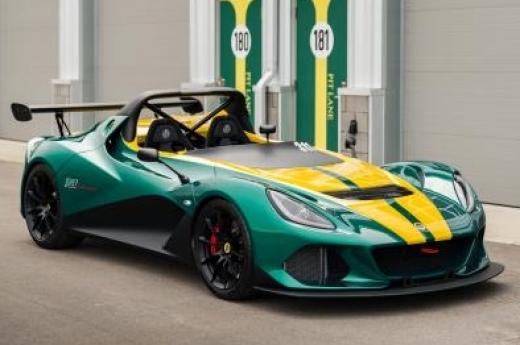 Since its inception in 1952, Lotus has maintained the same mantra for 66 years- Lightweight, nibble, and agile wins the race. Colin Chapman was not worried about power output as much as how many unnecessary items can he remove from the car to make it faster around corners. Those cars that out performed Lotus's on the straights were immediately disappointed as the Lotus passed them on the ensuing corners. Colin Chapman famously proclaimed Adding power makes you faster on the straights. Subtracting weight makes you faster everywhere else. Today, the equation remains the same and the 2017 Lotus 3-Eleven is the epitome of Chapman's famous quote applied with modern technological advancements. The 3-Eleven delivered record shattering performance. It came in two variants, Road and Track versions with subtle differences between the two, namely the fact that the Road Version was street legal in Europe and came fitted with a 6-speed manual gearbox. The alternative Track Version was not road legal and came with a paddle-operated gearbox. Upon its release, it was the 5th fastest production car around the Nurburgring and also set the Hockenheimring production car lap record at 1 minute 06.2 seconds. That is faster than the Porsche 918 Spyder, 488 GTB, and more. Power is delivered by a supercharged 3.5 Liter V6 aluminum engine producing 410 hp in the 3-Eleven's Road Version. It sprints from 0-60 mph in just 3.3 seconds which made it Hethel's fastest road car ever produced at its release. Not only is the 3-Eleven fast, significant, and a fabulous car to drive around the track, it is also rare. Only 311 cars were produced and this example is likely one of the only cars currently available on the public market.

The car on offer here, chassis # SCCLLLVL7HHG10095 is a nearly new, one-owner example with 156 miles finished in Racing Green over Black. Its first and only owner, a serious Lotus collector, purchased the car directly from Lotus Motorsport in the UK with a delivery date of 11/13/2016 to Boardwalk Auto Mall in Redwood, CA. The total purchase price as indicated in the original sales forms was $157,743.20. At the time of purchase, the owner also ordered a Momo Tuner steering wheel with quick release hub directly from lotus Motorsport as the stock wheel does not have quick release capabilities, essentially the track version steering wheel setup. The factory steering wheel and hub is included in the sale. Though it is a Road Version, it is only street legal in Europe and NOT eligible for public road use in the United States. As stated in the original NHTSA Affidavit, This vehicle may not be registered for use on or operated on the public roads or highways. Today, this car presents in as-new condition accruing only 156 break-in miles and is part of a 4 car collection of British track stars being sold by LBI Limited on behalf of the long time Lotus Enthusiast owner. This 3-Eleven is a definite modern collectible possessing the perfect blend of rarity, performance, and purpose built beauty. With its traditional 3-pedal gearbox, the Road Version is arguably more desirable in the eyes of true driving enthusiasts. This nearly new example is a rare opportunity to own one of the very few 3-Elevens located in the United States and will be a smart addition to any British car collection.

Note from the publisher:
Welcome to our collector car marketplace where we feature thousands of classified ad listings of vintage cars for sale. We hope that you will bookmark our site and visit often; our cars are updated every day. Furthermore we encourage you to subscribe to our mailing list so that we may periodically notify you of interesting classic cars that become available.
Home > Classic Cars For Sale > Lotus > > 2017 Lotus