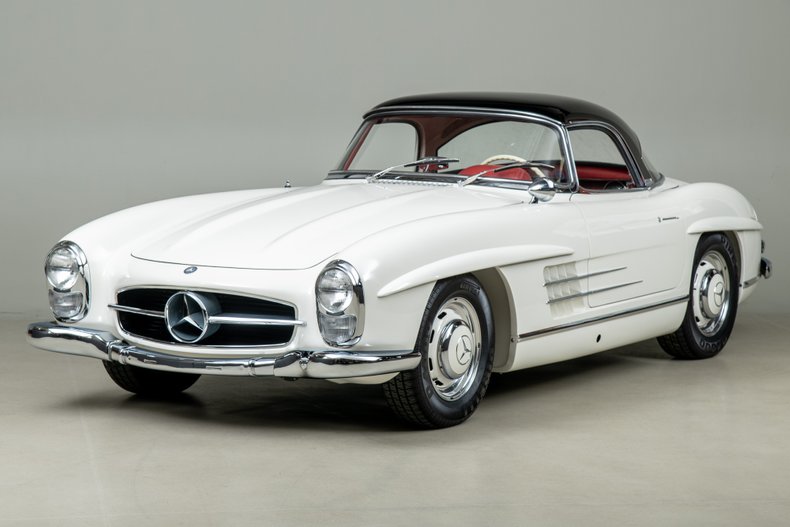 1963 Mercedes-Benz 300SL Roadster View high resolution photos Second-to-last 300SL built Rare disc-brake example One of only 200 Aluminum alloy engine Has every upgrade ever made to the 300SL platform Original red leather interior Documented ownership history Has Mercedes-Benz Zertifikat, and Fahrzeug-Daten card Complete with its original hardtop, books, tools, luggage, spare and jack The overwhelming popularity of open-top two-seaters in the late 1950s had Mercedes-Benz reevaluate their current class-leading car, the 300SL Gullwing. Releasing the first 300SL Roadster in 1957, the platform would go on to become a car that was synonymous with style, performance and luxury. Immensely popular among affluent individuals, they were a status symbol of the era and were considered the best open-top car money could buy. This particular Mercedes-Benz 300SL Roadster is the second-to-last example every built. With its 4-wheel disc brakes, aluminum alloy engine and benefiting from every upgrade made to the 300SL platform since 1954, making this 300SL one of the rarest surviving examples to wear the 300SL badge. The final production of the legendary 300SL Roadster happened in January and February of 1963. Twenty-six cars would be built in those two months, with the last six built in February. This car, chassis 3257, was completed the day before the factory closed on February 7th, 1963, making it the penultimate 300SL. Because this is the second-to-last 300SL ever made, it benefits from every improvement made to the 300SL platform, with disc brakes and the aluminum-alloy engine only in the last 200 cars. This Roadster was delivered from the factory in white over a red leather interior, optioned with a black convertible top. Its early history is immensely interesting: Fresh from the factory, it was sent to Mercedes-Benz in Salzburg, Austria, but research indicates that the 300SL did not sell on its initial outing and was returned to the factory for upgrades. The result of this return to Stuttgart was a second build sheet for 3257, adorned with more options than before. Obviously aimed for the U.S. market, the car was fitted with sealed beam headlights, optioned with a factory hardtop, a U.S.-spec Becker Grand Prix radio, white wall tires, and gauges in English. The 300SL wasnt converted completely from Euro spec however, as it retained its 3.64 rear differential, Euro steering column, and did not have any rear DOT reflectors. The upgrades did their magic, and the white over red 300SL was sold on February 14th, 1964, one of only three 300SLs sold in 1964. The first known owner was Robert Lindsay of Spokane, Washington. The first repair order documenting his ownership dates to September 22nd, 1967 when the car only had 19,055 miles on the odometer. On January 2nd, 1968, at 19,365 miles, Lindsay had to replace the engine block and pistons. The engine was replaced with a factory-original aluminum block, and the original engine tag was transferred to the new engine block. In late 1970, Lindsay sold the car to Bill Sutherland, owner of Sutherland-Marlow, Inc., a Mercedes-Benz dealership in Spokane. While his ownership was brief, he used this 300SL regularly, putting almost 10,000 miles on the car that year., His final repair order dates to November 24th, 1971 with an odometer reading of 28,547 miles. In December of 1971, the 300Sl was purchased by Mercedes-Benz dealer Phil Smart Sr. There are numerous repair orders from Smarts ownership at his dealership in Seattle, Washington, evident that he fastidiously maintained the Roadster. The cars last recorded mileage under his ownership was in 1976 at 32,635 miles. Smart kept the Roadster in his possession until the 1980s. Long time collector and entrepreneur, Gordon Apker, got a call offering him the 300SL along with other collector cars. Apker, who pa