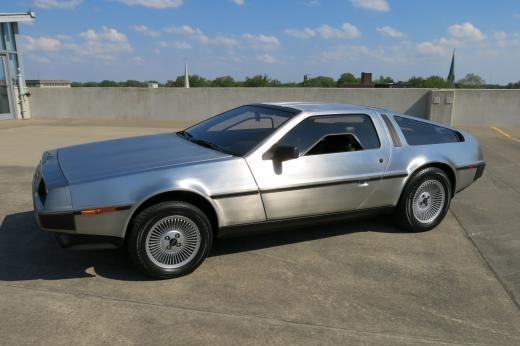 Mileage: 8,410
1981 DeLorean DMC-12 Coupe (VIN: SCEDT26TXBD001762), SS304 brushed stainless steel with a black leather interior, 8,410 *original* miles and the desireable 5-spd. manual transmission, only 2 local physician owners from new. Built from 1981-1982, the DMC-12 was the brainchild of former GM executive John Z. De Lorean. It was styled by Italian stylist Giorgetto Giugiaro and the chassis and suspension were engineered by Colin Chapman, founder of Lotus Cars. About 9,200 DeLorean DMC-12s were produced between January 1981 and December 1982. In 2007, about 6,500 DeLoreans were believed still to exist. This vehicle has a clean CarFax report showing no accidents and has known local ownership from new. It is a 2-owner car (both physicians) purchased new locally and the selling dealership (Cooke Chevrolet) was owned by one of my best friends grandfather (John Cooke). This DeLorean has never been owned or registered outside of Evansville, IN and it has never been advertised on the market for sale until now. Exceptionally nice body and interior and drives very well. It has books and manuals, very good service history and a full set of keys, plus the dealer installed DMC floormats. This is probably one of the few on the market that has the factory stainless steel car care detailing kit and original DeLorean owners / motor club newsletters, articles and parts & accessories brochures. The DMC-12 was only available with two factory options; a manual transmission and the choice of a grey or black interior (black is most sought after by buyers). This example also has some dealer installed options, incl. floor mats & black leather door pull straps. During the last few years DeLoreans have experienced a bottoming out of values and now are on the rise as investment grade collectibles! This example is very reasonably priced at $41,500.00 / obo. Call or text Brian @ (812) 760-5513 - Evansville, IN 47715.

Note from the publisher:
Welcome to our collector car marketplace where we feature thousands of classified ad listings of vintage cars for sale. We hope that you will bookmark our site and visit often; our cars are updated every day. Furthermore we encourage you to subscribe to our mailing list so that we may periodically notify you of interesting classic cars that become available.
Home > Classic Cars For Sale > DeLorean > DMC-12 > 1981 DeLorean DMC-12