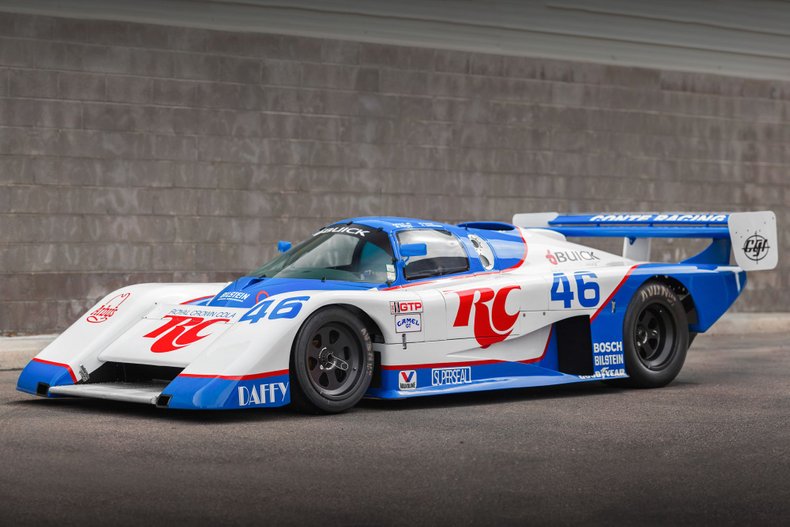 Price: Contact Seller for Price
View high resolution photos Watch in-car footage of the March 85G at the 2018 Rolex Monterey Motorsports Reunion Top qualifier/Pole position: 85 24 Hours of Daytona, 85 Grand Prix of Miami, 86 Sebring 12 Hours Two podium finishes in 1986: 500 kilometer Charlotte, 500 Miles Watkins Glen The first of two 85G chassis acquired by Conte Racing for 1985 season Driven by John Paul Jr., Bill Adam, Whitney Ganz, Bob Lobenberg, Ken Marden, Jim Crawford 85G design led by chief March Engineering design engineer Robin Herd 3.4-liter turbocharged V6 engine developed by McLaren Engines Mechanically and cosmetically restored by EMG Motorsports March Engineering originally began as a Formula 1 constructor and manufacturer of customer race cars in the UK. Founded by Max Mosley, Alan Rees, Graham Coaker, and Robin Herd (a design engineer of McLaren F1 race cars in the 60s), each had a specific set of expertise which produced a well-rounded team. Adrian Newey, the current Chief Technical Officer for the Red Bill Racing Formula 1 team, even designed his first F1 car with March Engineering. However, despite these beginnings March found a much higher level of success with other race series, notably the American IMSA GTP sportscar racing series. These prototype racers were not only incredibly quick, but also boasted a unique design and a variety of powerplants ranging from Chevy V8s, Porsche twin turbos, and Buick turbo V6s. The IMSA series was founded in 1969 which debuted in 1971 at Virginia International Raceway. The use of turbochargers was banned until 1977, opening the door for a number of new cars. In 1981, a new category came along: GTP (Grand Touring Prototypes). These purpose-built race cars were similar in design to those racing in Europe under the Group C banner, but with a key difference being that there was less of a focus on fuel economy in America. As Derek Bell famously said, race fans do not come to races to watch an economy run! March 85G-1s story begins with Phil Conte, a Brooklyn-born individual who ended up spending an early part of his life in California. Phil, with a background in electrical manufacturing building high-voltage components, was inspired to start racing after visiting the 1975 Long Beach Grand Prix. Originally wanting to get into Can-Am, he saw the decline of the series during his participation in the early 1980s and decided to make the jump to the GTP series. Phil and his team found limited success in 1983 and 1984, but at the end of the 1984 season Conte was approached by Buick. What quickly spun together was a pairing between McLaren to take care of the turbocharged Buick engines for Conte and his team. Overnight, Phil Contes racing team became the official factory Buick race team. The 1985 season proved that the March 85G was an extremely capable and lightning-fast car. During the 1985 season it was able to take pole position at the 24 Hours of Daytona and the Grand Prix of Miami races, and in 1986 took the pole position for the Sebring 12 Hours. Its best finish was in the 1986 season at the Charlotte 500 Kilometers, and Watkins Glen 500 Mile, taking 3rd overall each time. After the car was retired from racing, it remained in storage for a number of years before being rescued by Ray Langstrom of Miami, Florida. Owner of a significant competition automobile workshop, he had the car restored to track-ready condition, leaving the mostly original body and paintwork untouched while making sure all the mechanicals were taken care of. In 2012 the March 85G made its first appearance at the Rolex Monterey Motorsports Reunion. Since 2012 the March has passed through a few different caretakers before coming to Canepa and EMG Motorsports. Acquired together, EMG Motorspor

Note from the publisher:
Welcome to our collector car marketplace where we feature thousands of classified ad listings of vintage cars for sale. We hope that you will bookmark our site and visit often; our cars are updated every day. Furthermore we encourage you to subscribe to our mailing list so that we may periodically notify you of interesting classic cars that become available.
Home > Classic Cars For Sale > March-Buick > 85G > 1985 March-Buick 85G