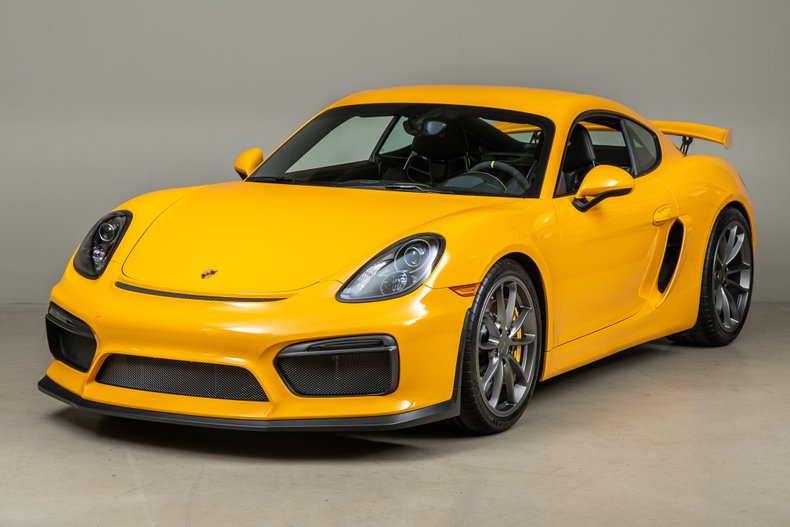 Price: Contact Seller for Price
2016 Porsche Cayman GT VIN: WP0AC2A85GK191909 Paint-to-Sample Signal Yellow over Black Leather Over $30,000 in factory options Produced for only one year and in limited numbers Developed by Porsches Motorsport Division 532 miles, 1 owner, in as-new condition Has original window sticker, books, tools, original delivery accessories Porsche factory warranty active until the end of April in 2020 or 50,000 miles Announced in 2015 at the Geneva Auto Show, the GT4 was the first Cayman to wear the GT badge. Based on the 981 Cayman that was first introduced in 2012, the mid-engine GT4 used the potent powerplant from the 911 Carrera S that produced a stout 385 horsepower. Its front suspension and steering were sourced from the track-focused 911 GT3, making it a capable and worthy performer. With the announcement that the new 911 GT3 and GT3 RS would not be offered with a manual transmission, the GT4 was a godsend with its 6-speed manual transmission as its only gearbox option and remains immensely popular in Porsches enthusiast circles. With a few aesthetic changes to the front fascia, more aggressive side inlets and a fixed motorsports-inspired wing, the GT4 stands out against its otherwise pedestrian Cayman siblings. Porsche proved that the development did pay off by lapping the North Loop of the Nrburgring in seven minutes and 40 seconds on the same level as the 2011 Porsche 911 GT3. This 2016 Porsche Cayman GT4 was first delivered new in Zuffenhausen as part of Porsches European Delivery Program in April of 2016. Finished in the beautiful paint-to-sample Signal Yellow over its Black leather interior with yellow stitching, this Cayman was ordered with over $30,000 in factory options. Some of the notable options include the full carbon bucket seats lifted directly from the Porsche 918, Porsches Ceramic Composite Brakes, the Extended Interior Package with the dashboard in leather, a Lightweight Lithium Ion battery, Sport Chrono package, Deviated Stitching, and the extended range fuel tank. With interior touches finished off in aluminum, alcantara and leather, the total MSRP of this GT4 was $117,190. With only 532 miles on its odometer, this GT4 presents in as-new condition and offers the rare chance to own what is essentially a brand-new Cayman GT4. Produced for just a single year and in limited numbers, this 2016 Porsche Cayman GT4 offers the new owner to experience what a new Cayman GT4 feels like and drives like. Lightweight, powerful and immensely fun to drive, it is the perfect trifecta for any Porsche enthusiast.

Note from the publisher:
Welcome to our collector car marketplace where we feature thousands of classified ad listings of vintage cars for sale. We hope that you will bookmark our site and visit often; our cars are updated every day. Furthermore we encourage you to subscribe to our mailing list so that we may periodically notify you of interesting classic cars that become available.
Home > Classic Cars For Sale > Porsche > Cayman GT4 > 2016 Porsche Cayman GT4