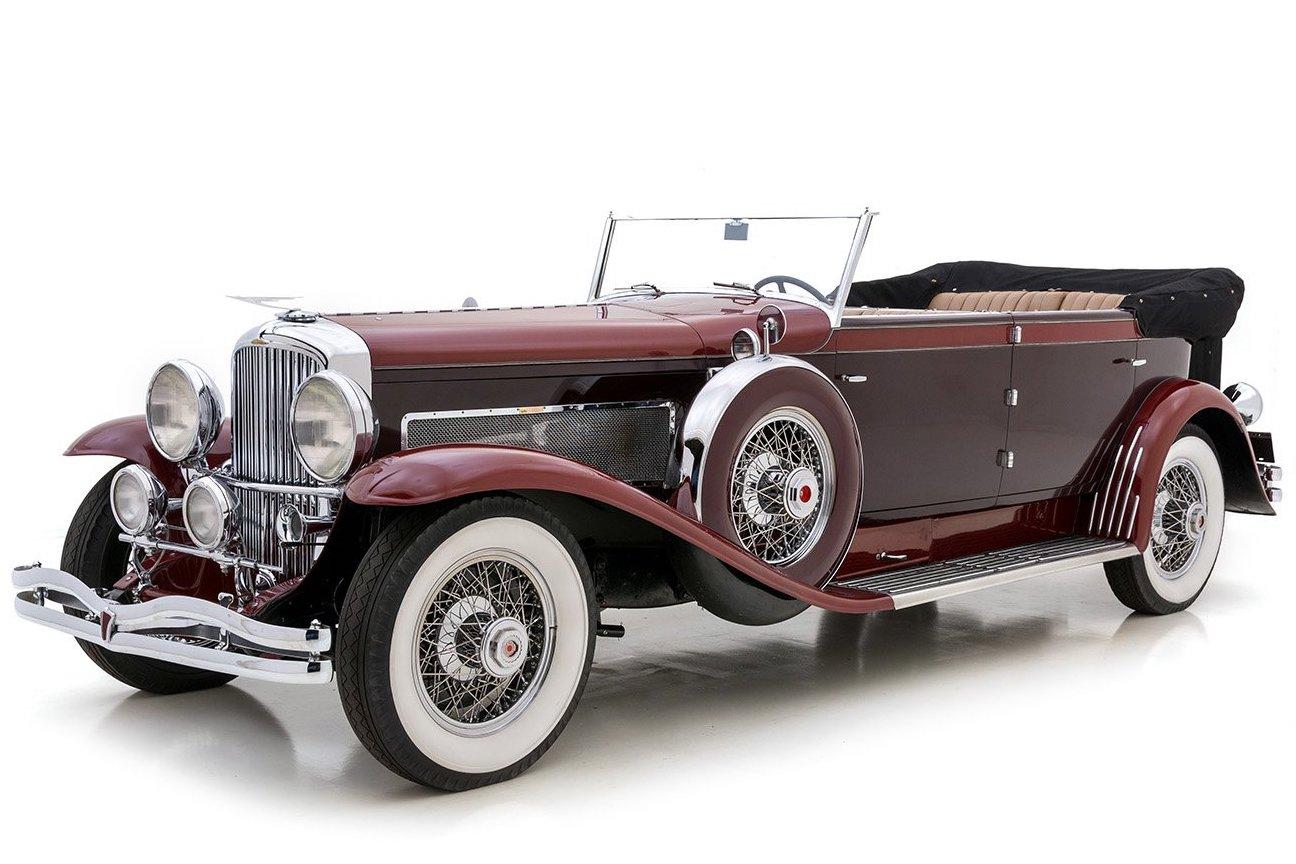 Within moments of the Duesenberg Model Js debut at the New York Auto Show on December 1 1928 the worlds business moguls movie stars and social elite lined up for their chance to own the glamorous new supercar from Indianapolis. At the heart of the Model J lay a 420 cubic-inch Lycoming-built inline eight-cylinder engine featuring twin overhead camshafts and four valves per cylinder rated at an astonishing 265 horsepower in naturally aspirated form. The Duesenberg brothers paired their magnificent engine with a highly advanced chassis featuring powerful cockpit-adjustable hydraulic drum brakes and fully automatic chassis lubrication that operated every 30-60 miles features years ahead of their time. The Model J vanquished nearly everything else on the road and was the fastest most exclusive and most expensive car in America. Unfortunately for E.L. Cord the car arrived on the eve of the Great Depression and at nearly $10000 for a chassis alone and Cords dream of 500 vehicles per year was shattered. In reality production topped off at just 481 cars in total and sales gradually trickled on through the late 1930s. Today the Model J and its derivatives stand as the Gold Standard of Classic Era automobiles. They hold a place of pride among the most iconic and desirable motorcars ever produced in America and are an enduring symbol of the style and grandeur of the 1930s.Chassis number 2377/J-360 is a uniquely appealing Model J that benefits from decades of enthusiastic use. Many enthusiasts know this car as the Ben-Hur Duesenberg as it was purchased new by Lew Wallace Jr. grandson of Maj. Gen. Lew Wallace a Civil War-era Union General and author of the classic benchmark novelBen-Hur: A Tale of the Christ. Historical records show this is one of fourteen long-wheelbase Model Js originally fitted with Murphys handsome Convertible Berline coachwork. As a 9th series car it was custom ordered and built to the buyers exact specifications. Today it retains its original numbers-matching engine original crankshaft chassis firewall and coachwork and is offered with a marvelous patina earned through years of driving enjoyment. In fact in the 20-plus years with its most recent custodian 2377 has racked up an estimated 35000 miles touring all over the United States England Ireland Norway and Sweden.According to marque historians Lew Wallace Jr. took delivery of his new Duesenberg on June 24 1930 costing him an estimated $17500. Wallace Jr. had a considerable inheritance from his grandfather which included royalties from various stage and film productions ofBen-Hur. Unfortunately for Wallace even he was not immune to the staggering effects of the Great Depression and while his family was better off than many they were forced to economize and by 1934 the Duesenberg and a Weymann-bodied Stutz were sold replaced by a 1932 Ford Sedan!Wallace sold his Duesenberg J to Maurice Cleary of Hollywood allegedly for $1000 a rather painful depreciation curve over four years. Records indicate it passed through three additional caretakers in short succession ending up with William Strong in 1936. Strong owned the car until 1945 when he sold it to Gerald Clark who continued caring for the Model J and preserving its superb original condition. Clark had the car maintained by Marshall Merks who had previously acquired spares drawings and records from the shuttered Duesenberg factory. While in the care of Hobart Winfield Betts (after 1952) 2377 was repainted in its current burgundy color scheme by Reuters in New York City along with some restoration of the chrome plating and additional mechanical service. Subsequent ownership changes are well documented in the accompanying history file and photos from the 1930s through today reveal it was always well maintained never damaged and the original Murphy coachwork survived the decades virtually unscathed.In 1972 2377/J-360 was acquired by Mr. Earl Broyles. Early in his tenure he purchased the outside exhaust pipes and the necessary hood panels from Merks. He also fitted the steerable Pilot Ray lights and 19-inch chrome wire wheels supplied by Don Sommers legendary shop American Arrow Corp. Broyles lovingly cared for the Duesenberg and maintained its remarkably well-preserved condition over his 25-year ownership stint.The most recent owner acquired 2377 directly from Mr. Broyles in 1997. At the time it showed 48000 miles which was believed to be accurate and it retained the original tan leather interior and finely preserved 1950s paintwork. A cursory inspection after getting it home revealed it was still running its original aluminum connecting rods. While the engine ran exceptionally well the owner decided to rebuild the engine with new Carrillo high-strength rods and Arias pistons to avoid potential failure. The owner entrusted the work to the marque experts Classic & Exotic Service in Michigan who during the teardown noted that the engine had likely never been apart! They also installed a high-speed ring-and-pinion set to improve cruising performance and had the instruments rebuilt by Don Sears. With reliability in mind American Arrow supplied a new set of wheels with heavy-duty spokes. Additional work included restoring the interior and various sorting to ensure everything worked and the car was reliable for touring. Once dialed-in the new owner wasted no time in racking up the miles. They thoroughly enjoyed using the Model J as intended participating in Duesenberg tours and events across the United States Canada Scandinavia and Great Britain adding some 30000 miles to the clock in the process.Today chassis 2377 is offered in fantastic condition with a refreshingly honest patina to the paint and interior earned through years of use. It has been inspected by the Auburn Cord Duesenberg Club and certified as a Category 1 Original car. As a testament to its quality 2377 was shown at the Amelia Island Concours dElegance and at the 2015 CCCA Annual Meet in Savannah Georgia where it won a 1st Prize award Touring Division. Chassis 2377 represents a rare opportunity to acquire a Model J with desirable coachwork and fascinating provenance that is also tour-ready and certain to provide many miles of joy to its next caretaker.Offers welcome and trades consideredFor additional details please view this listing directly on our website https://hymanltd.com/vehicles/7157-1930-duesenberg-j-murphy-convertible-berline/