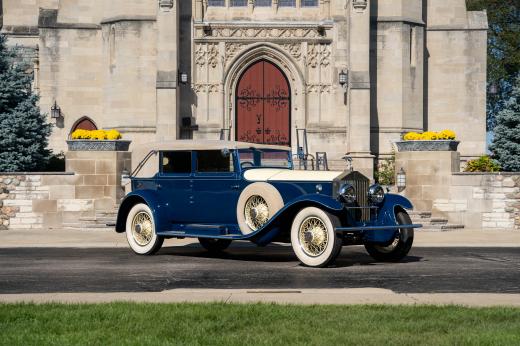 Price: USD $175,000
- Chassis # 79OR
- Engine # ZG85
- Retaining Its Original Engine And Drivetrain
- Body Constructed Entirely Of Aluminum Utilizing The Sylentlyte Technique
- Benefiting From An Extensively Documented History
- Possibly One Of The Most Important P1 Rolls-Royce In Existence

The Rolls-Royce Phantom was Rolls-Royces replacement for the original Silver Ghost. Introduced as the New Phantom in 1925, the Phantom had a larger engine than the Silver Ghost and used push-rod operated overhead valves instead of the side valves in the Silver Ghost. Phantoms were built in one of two factories, one in Derby, England, and the other in Springfield, Massachusetts. Between the two there were several differences in specifications, which included the wheelbase and the transmissions offered. The US-built cars had a slightly shorter wheelbase than the UK-built ones at 3721 mm and 3822mm respectively. The next difference was in the transmission. While both cars got the same single dry-plate clutch, the US-built examples got a 3 speed while the UK built ones a 4 speed.

In this era, Rolls-Royce only produced the chassis and mechanical parts, leaving the body in the hands of a coachbuilder of the original purchasers choice, depending on whether the chassis was US or UK spec. In this period, the choices were plentiful, with marques such as Barker, Park Ward, Bidde and Smart, Thrupp & Maberly, Mulliner, and Hopper all available to UK based clients, and Chatsworth, Newmarket, and Hibbard & Darrin were available to US-based clients.
Howard Darrin met Tom Hibbard in 1923. Hibbard by this time had left the well-known designer LeBaron, and the two set off to Paris and started their own company, Hibbard & Darrin. In the years following the two built innovatively styled bodies on many of Europes most prestigious chassis. In 1931, the partnership, unfortunately, ended when Hibbard returned to the United States to pursue a position in the design department and General Motors.

The Phantom l on offer here, chassis #79OR, is a 1930 Rolls-Royce Phantom l Imperial False Cabriolet by Hibbard & Darrin. Construction of #79OR utilized the Sylentlyte body technique on the longest chassis, The Sylentlyte technique uses cast aluminum for the body structure instead of the wood that would traditionally be used, which was an exclusive crafting technique to Hibbard & Darrin at the time. Also worth noting, it is believed that only two Phantom ls were built on this elongated chassis utilizing the Sylentlyte technique, one for King Leopold, and the other, this chassis, for Princess Pageteli of Italy.

This car benefits from an extensively documented history including service records, manuals, and a build sheet of the car. According to the documentation included with the sale of this car, the chassis was completed in 1930 at the Derby, England Rolls-Royce plant. The chassis was then sent to Hibbard & Darrin who were located in Paris, France. The chassis cost $16,650 while the body cost $9,985 bringing the total to $26,635. The completed car was then delivered to Italy where it resided with Princess Pageteli. From here the history gets a little vague but at some point, the car made its way to the US shores. According to included restoration photos which are available in the documents section located above, it appears that this P1 was restored in 1970 by a Mr. John Griffin of Montgomery Alabama. Mr. Griffin was responsible for the expert restoration of other fantastic and rare Roll-Royce vehicles and his expertise shows in this car as well. It appears that shortly after the restoration the car was sold to a Mr. Reid of Ohio in 1981 from a Mr. R.J. Moye of Emmanuel County, Georgia, who is possibly the gentleman who had the car restored. Mr. Reid was an enthusiastic owner of the car and is responsible for much of the communications and history that we now have on file. A notable letter from the period Mr. Reid sent to Thomas Hibbard describes a morning he spent with John Griffin, the man who restored chassis #79OR and how delightful his garage was, and how many prizes he had one as an antique automobile restorer. Though today the Phantom sports a tan top, photos from 1970 show the car originally had a dark-colored top, though both suit the car equally well.

Today this very special Roll-Royce P1 presents very nicely for the age of the restoration. There are a few minor things that could be touched up and attended to in order to bring this car to its full potential. Once fully in order, both the special body and its unique construction, ensure that this P1 would be welcome at shows and concourses around the country.