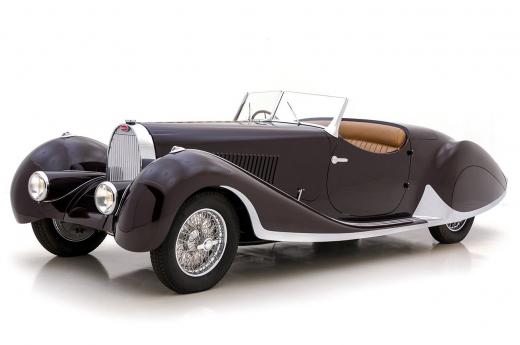 When Bugattis spectacular Type 57 debuted in 1934 nobody knew it would be the final all-French design in the legendary marques brief yet brilliant history. The firms patriarchal leader Ettore Bugatti was fully committed to developing the petrol-powered rail cars ordered by the French government so he charged his son Jean just 23 years old at the time with the task of designing the firms latest high-performance touring car. Jean and senior engineers Pichetto and Domboy were wholly responsible for the cars specification from the ground up including the chassis engine and even the factory body designs. Bugatti needed a new vehicle to remain competitive one that retained the performance and style for which Bugatti was known while offering new levels of comfort and easy operation.At the heart of the Type 57 sat an all-new twin-cam inline eight-cylinder engine displacing 3257-cc. The basic layout was familiar though the block (with integrated head) and crankcase were new items. Bevel gear-driven camshafts were more refined than the previous straight-cut style and in standard form the new engine produced a highly respectable 135 horsepower or 160 with the optional supercharger. While the Type 57 was not officially used for competition legendary Type 59 Grand Prix cars shared the fundamental engine design. The chassis borrowed heavily from Bugattis playbook with the well-proven solid front axle that guided all previous Bugattis to countless motorsport victories but with ride and handling tuned to suit the intended purpose as a fast yet luxurious touring car. Jean Bugatti designed four distinct in-house bodies for the Type 57; theGalibiersaloonVentouxfour-passenger coupeStelviofour-seat cabriolet and theAtalantetwo-seat coupe. Of course independent coachbuilders including Figoni et Falaschi Gangloff and Saoutchik also created spectacular designs for the Type 57.Jean Bugatti tragically lost his life in a testing accident in 1939 and the onslaught of war all but destroyed the Bugatti family concern. The Type 57 stands as the last of a proud line of pure French Bugattis with provenance that only comes with the great motorcars from Molsheim.Offered here is chassis number 57617 a highly desirable late-specification Type 57C equipped from new with a supercharged 3257 cc 160 horsepower engine. A detailed report compiled by the noted marque historian Pierre-Yves Laugier reveals this chassis fitted with engine number 16C was delivered to Carrosserie Vanvooren on November 25 1937. The buyer Mr. Jean Gapiand had specified acabriolet decapotablebody similar to the one he had seen on the coachbuilders stand at the Paris Automobile Salon. Records show that Gapiand paid Frs.70000 in part exchange for his 18-month old Type 57 Ventoux chassis 57364. Gapiand was known to have a short attention span when it came to his cars and he sold 57617 after just one year switching to a Bentley 4 -litre.After the war the Type 57 was owned by Jean-Claude Georges a chemical engineer and sports car enthusiast who had the car serviced by Roger Teillac in Paris. It passed through two additional owners before landing in the collection of Jean Serre of Montebeliard. Serre and his family handled many Bugattis in the 1950s and 60s amassing one of the largest hordes of Bugatti cars and spares. When it emerged from the Serre collection in the 1990s the original Vanvooren coachwork had been transferred to another chassis or possibly lost. It came stateside via a broker joining the Malcolm S. Pray Jr. Collection in Greenwich Connecticut.On joining the Pray collection experts determined the car retained its original engine no. 16C and supercharger no. 6S; while the gearbox 38C is known to be from chassis 57726 a supercharged Letourneur et Marchand cabriolet. It is believed that the gearbox was fitted in the 1950s while in Teillacs Paris garage.In the early 2000s Mr. Pray enlisted the services of the renowned Alan Taylor Company in California to fully restore the chassis and craft the beautiful French-inspired aluminum alloy coachwork. Taking cues from Vanvooren and Figoni et Falaschi bodies of the period the sweeping lines and gracefully curved wings form an arresting shape. Receipts and photo documentation of the restoration are all on file along with historical records and reports from marque historians. Taylor and his team completed the project late in 2006 and Mr. Pray debuted the car at the 2007 Meadowbrook Concours. He showed great pride in his Bugatti exhibiting it at numerous events and taking many awards and Best in Show accolades along the way. While in his care the supercharged engine was tuned and fettled by the historic specialists D.L. George Coachworks ensuring the car not only looked the part but performed at the peak of its ability.Following Mr. Prays passing the Type 57C found a home in a private collection where it was meticulously maintained and shown on rare occasions and has been kept in exquisite condition as it is presented here. The gorgeous aubergine paint is accented with sweeping chrome motifs that highlight its flowing lines while the tan leather cabin is finely detailed. A tan canvas soft top features matching side curtains which all stow neatly behind the seats for a clean uncluttered look. The superb cosmetics are matched by its excellent mechanical condition with the distinct mechanical howl announcing the presence of the optional factory supercharger. Above all this Type 57 remains in concours condition with the power and performance to thrill occupants on driving events.Theres no doubt that chassis number 57617 is a highly desirable example of Bugattis finestGrand Routier pairing a matching numbers chassis and supercharged engine with striking period-inspired coachwork by a renowned specialist. Then as now this Type 57 owes its existence to the skill and art of the master coachbuilder.Offers welcome and trades consideredFor additional details please view this listing directly on our website https://hymanltd.com/vehicles/7063-1937-bugatti-type-57c-cabriolet/