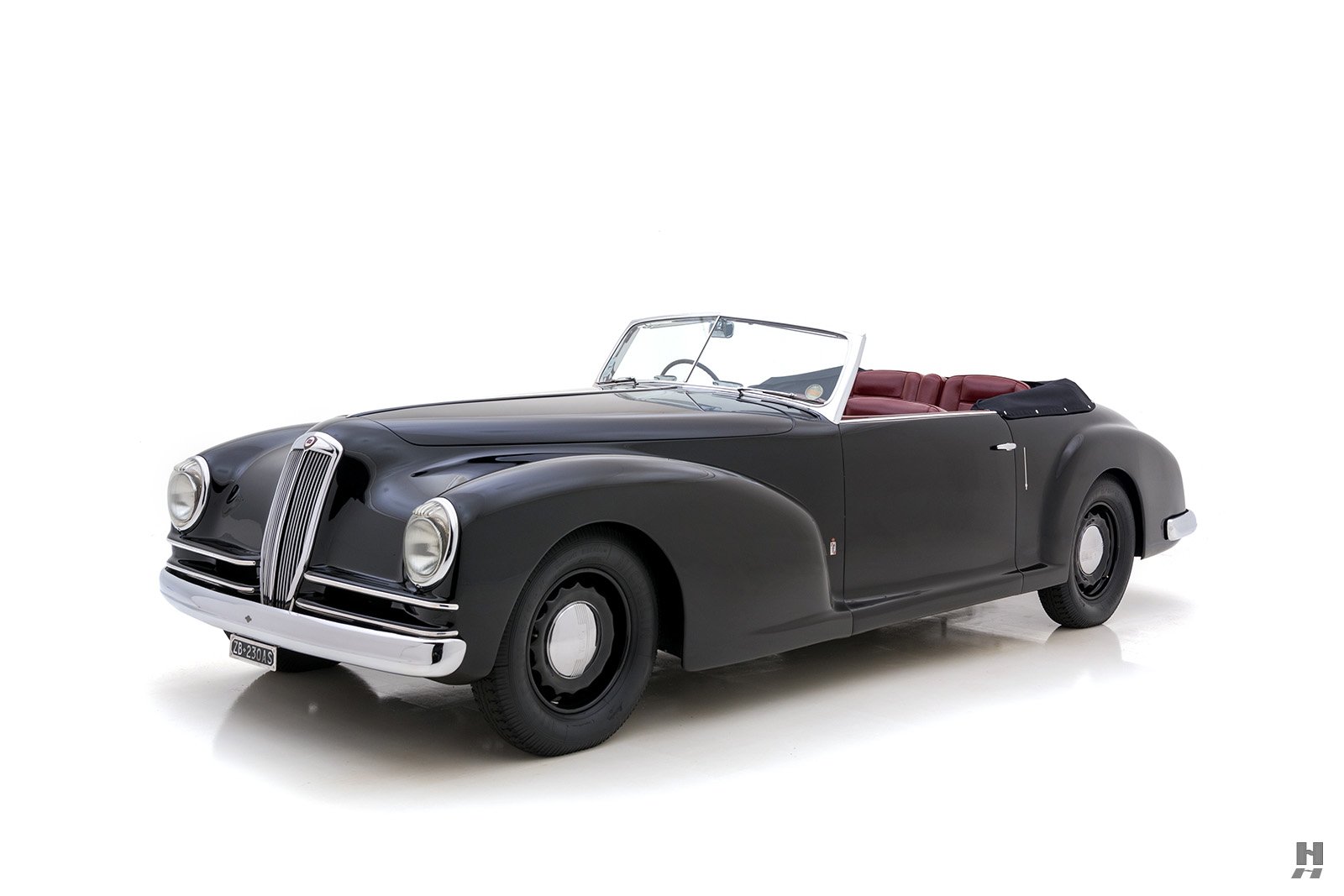 When the Astura debuted in 1931 Lancia was already well-established as one of the most respected automobile manufacturers in the world. The brilliant engineer Vincenzo Lancia gave life to such vehicles as the Kappa Lambda and Dilambda all revered for their advanced engineering superb build quality and revolutionary design features. Because Lancia was a small company new models often overlapped with outgoing ones as was the case with the Astura which sold alongside the Dilambda for the first few years. Like the Dilambda the Astura featured a separate chassis rather than the stressed unitary body of the Lambda. While arguably a step back technologically this allowed Italys finest coachbuilders to work their magic on the otherwise brilliant platform. The design was shared with the four-cylinder Artena though the Astura served the flagship role thanks to the superb ingenious narrow-angle V8 engine. The Astura formed the basis of some of the most spectacular of all pre-war Lancias favored by Italys cultural and political elite throughout the 30s.For the Series III the Astura gained the three-liter version of the V8 engine hydraulic brakes and the option of short or long-chassis variants. The final Series IV version built between 1937 and 1939 featured the same mechanical spec but was only available in a long-wheelbase form. Coachbuilders across Europe made the most of Lancias superb flagship and stunning designs came from the likes of Pourtout Castagna Stabilimenti Farina and the fledgling Pinin Farina which would go on to create many breathtaking creations based on the Astura.As one of the last Asturas built chassis number 413195 is a long-wheelbase fourth-series example wearing sophisticated and elegant one-off cabriolet coachwork by Pinin Farina. According to the marque historian and collector Herv Charbonneaux himself a past owner of this car S/N 413195 was completed on November 17 1938 bound for Carrozzeria Pinin Farina. The chassis was said to be a special order by Count Galeazzo Ciano Benito Mussolinis son-in-law and his right-hand man as the chief propagandist in the fascist government. Like many high-ranking Italian officials Ciano was a Lancia connoisseur and had at least one other Astura in his private stable. But just as 413195 arrived at the coachbuilders workshop Italys involvement in World War II interrupted all of Italian industry meaning Pinin Farina would not complete the job until after the war. Unfortunately for Count Ciano he would never take delivery of his Lancia. When he suggested Italy may be on the losing side of WWII Mussolini summarily stripped him of his post for what he saw as the ultimate betrayal of trust. In 1944 Ciano met his fate by firing squad on Mussolinis orders.The Astura remained at the Pinin Farina workshop through the end of the war. With auto production in Italy at essentially zero coachbuilders were desperate for work. They began pushing the boundaries of design to attract what few buyers still had the means for bespoke coachwork. In 1947 Pinin Farina completed the striking body for 413195 debuting it on their stand at the Turin Auto Show the same year. It was apparently purchased by noted art collector and French aristocrat Baron Napoleon Gourgaud where it lived a gentle life as part of his Paris museum. In 1971 Philippe Charbonneaux and his son Herv purchased the Lancia from the Gourgaud collection and displayed it at their museum near St. Dizier. The collection still exists as theMuse automobile Reim-Champagne and a film on their website from 1972 momentarily captures the Astura appearing to remarkably sound and in original condition at the time albeit a bit dusty.It is understood that the next owner was Marco Gastaldi who acquired it from the Charbonneaux collection in 1977 and owned it through 1992. In 1993 Gastaldi sold it to Carlo Montorfano who commissioned Italian restorer Mario Galbiati to perform a mechanical overhaul and cosmetic freshening preserving the cars original interior. It changed hands again in 2007 and has since been in the care of devoted enthusiasts who have maintained it in superb condition.The imposing and grand Astura possesses a remarkable presence. Pinin Farinas brilliance is on full display making the most of the 137-inch wheelbase with a graceful and sophisticated fully-enveloped design that was years ahead of its time. The lack of excessive trim or finicky grille designs is in stark contrast to many early post-war cars and the car exudes quiet elegance. It is strikingly finished in black with black wheels black-wall Michelin tires and finely restored brightwork. The interior was recently restored with the rich burgundy leather true to original specifications and providing a perfect contrast to the understated livery. Paint and coachwork are superb with exquisite panel alignment and detailing.It might be a surprise to the casual onlooker to learn the Astura has a V8 under the bonnet. Topped with a single cylinder head it is astonishingly compact and a stunning display of engineering particularly since it was designed nearly a century ago. The engine compartment is clean and well-detailed reflecting some occasional use and remaining true to original specifications.This astonishing Lancia Astura participated in the 2021 Pebble Beach Concours dElegance where it completed the road tour without fault and took First in Class in a highly competitive grouping of European open coachbuilt cars. It has also been shown at the highly prestigious Concorso dEleganza Villa dEste and is accompanied by a FIVA passport and Automoclub Storico Italiano registration papers ensuring its eligibility for a wide range of road events and concours. This is a rare opportunity to acquire a significant piece of Lancia and Pinin Farina history that is sure to be a breathtaking centerpiece to any collection.Offers welcome and trades consideredFor additional details please view this listing directly on our website https://hymanltd.com/vehicles/7016-1938-lancia-astura-cabriolet/

This 1938 Lancia Astura was listed for sale on 9-10-21 16:12:15. The vehicle color is not available and VIN is not available . Kindly check ad for seller's location. Seller`s stock ID is hyman7016. There are other Lancia cars currently listed for sale on our website. You may desire to see what other Lancia cars are selling for by visiting our Sales Data page.