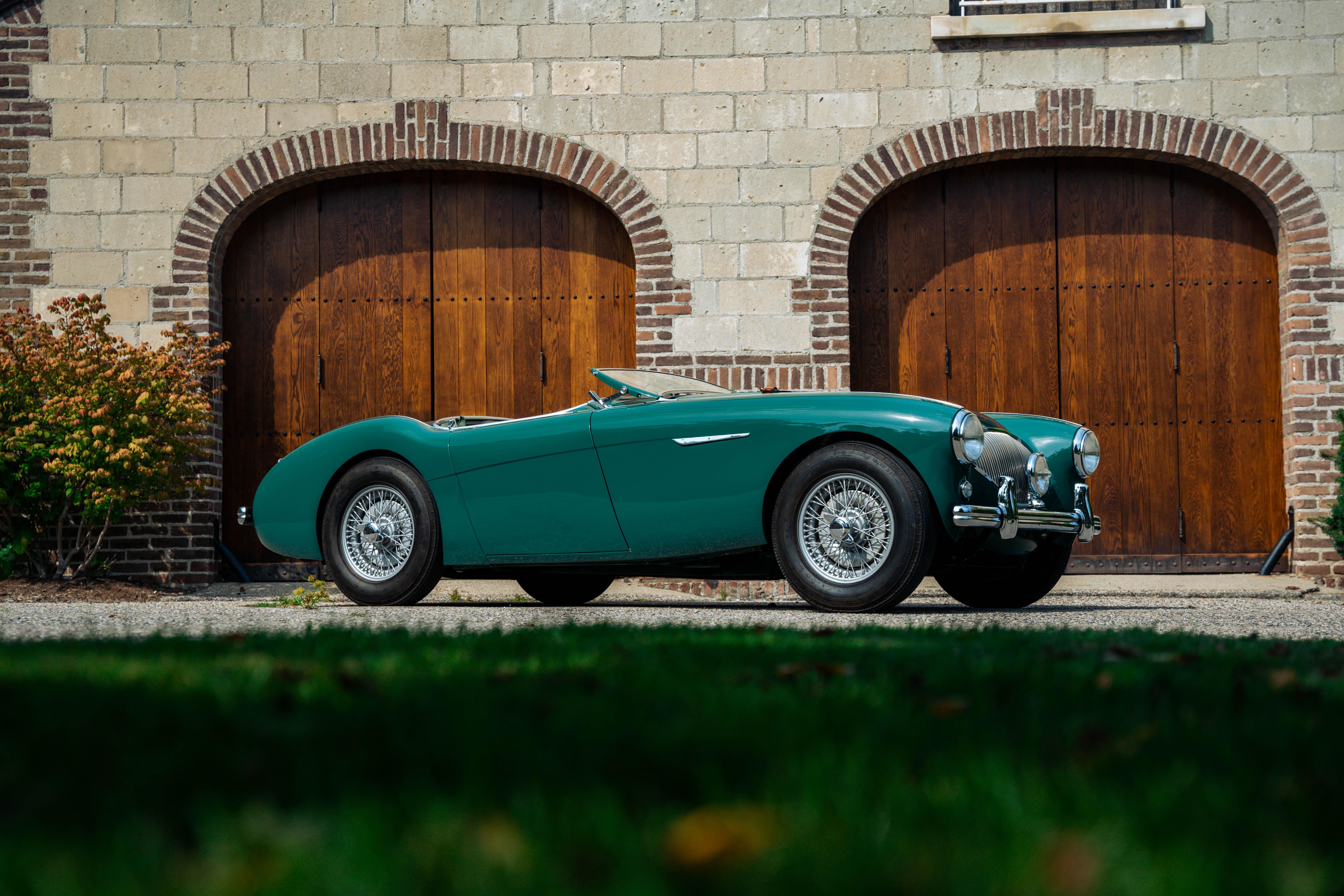 Making its debut at the 1952 London Motor Show, the Healey 100 was one of the most raved about cars of its time. It spurred such a ruckus amongst enthusiasts that the acting director of Austin, Leonard Lord, took enough interest to add Austin in front of the name through a partnership deal proposed by Donald Healey. With funding in place, the Austin Healey 100-4 began its short production run from 1953 until 1956. As this new British sports car entered the market, it became evident that these little roadsters were quite a machine both on the road and the track. 100-4s took to circuits worldwide as both factory race cars and privateer entrants. Proving themselves on the track, these agile 4-cylinder sports cars largely contributed to Austin Healeys success as a road car, allowing for significant near-term progression, evolving into the 100-6 and 3000 examples.

The 100-4 BN1 kicked things off equipped with a 90 bhp 2660cc inline 4 engine and 3-speed manual transmission with overdrive on second gear and top. The suspension used a familiar suspension setup while utilizing Austins worm and peg system steering. The car had a top speed of 106 mph as tested by The Motor Magazine and finished its 0-60 run in just over 11 seconds. The production numbers for the BN1s are quite low at 10,053 examples being built until August of 1955.

This stellar, late production 1955 Austin-Healey 100-4 BN1, Chassis #BNIL 221406, is a matching numbers example that shows less than 48,000 miles on its odometer. It wears its original Spruce Green color and beautiful matching dark green leather interior, as corroborated by the included BMIHT certificate. It comes with a perfectly fitting green convertible top and green tonneau cover, along with the original side screens in excellent condition and a complete tool roll. It is fitted with an overdrive and dealer-installed Marchal driving lamp along with the Le Mans package cold air box and louvered hood. The original hood is included with the car as well. It is shod with new period-correct Dunlop Road Speed RS5 tires. The restoration is believed to be a bit older but has held up impressively well with the car still displaying beautifully throughout.

Also worthy of note is the recent services that took place in 2018 through 2020. Just under $6,000 went into a full brake rebuild and service, battery replacement, aluminum engine components, and general upkeep items. Receipts for this service work are available for viewing in the documents section located above.

This car, with its light and lively chassis, provides an exceptional open-top motoring experience. Enhancing the experience even further the windshield can be placed in its lowered position, providing not only a great air-in-your-face experience but also a svelte and racing look to the car. These Healeys are a blast to drive and a sure-fire conversation starter no matter where you go.