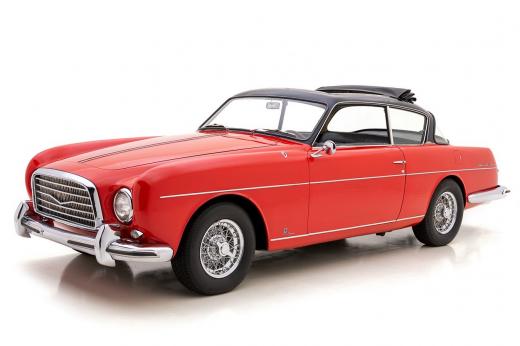 Price: USD $325,000
To anyone involved in the burgeoning American sports car scene in the 1950s Bill Frick is a legendary character. As early as the 1930s Frick was stuffing big engines into small cars and gearheads soon came to know him as the king of engine swaps. Customers soon came knocking to have Frick built their racing cars. In the local oval-racing scene he met Phil Walters a hotshoe driver known for his wild aggressive style and who raced under the pseudonym Ted Tappett to keep his family from discovering his dangerous hobby. The two men made a successful pairing with Frick turning wrenches and Walters doing the driving. They eventually formed Frick-Tappett Motors on Sunrise Highway in Rockville Center NY dealing in repair race prep engine swaps and sports car sales.In 1949 Cadillac introduced the new 331 cubic-inch OHV V8 engine. Despite it being saddled by heavy bodies Frick immediately saw the engines potential and shoved a 331 into a considerably lighter 1949 Ford chassis and the Fordillac was born. One notable early customer was Briggs Cunningham who bought a Fordillac after seeing one tear up a hillclimb event in Connecticut. Cunningham was so impressed by Fricks work that he purchased Frick-Tappett motors relocated it to Florida and hired Bill to prepare the teams Cadillac-powered machines for the upcoming 24 Hours of Le Mans. Walters incidentally served as a driver and team manager. While Le Mans was not a favorable result the team achieved back-to-back 1-2 finishes at Watkins Glen and Elkhart Lake earning Bill Frick the first-ever Sports Car Mechanic of the Year award.Frick soon returned home to New York to resume his car-building activities as Bill Frick Motors. He became enamored with the new 1953 Studebaker coupe but was equally unimpressed by its anemic 120 horsepower engine. Naturally this led to his latest project the Cadillac-powered Studillac. Much more than just an engine swap Frick modified the cross members suspension transmission tunnel brakes and steering to handle the additional power of the Caddy V8. By 1953 the Cadillac V8 was making 210 horsepower in stock form - and very few Studillacs left Fricks shop with stock engines! The Studillac had searing performance to match the beautiful looks and orders came pouring in. It became a highly exclusive and eminently desirable performance machine and it even featured in Ian Flemings James Bond novelDiamonds are Forever.When Studebaker unveiled a considerably less graceful design in 1955 Frick went looking elsewhere for his next project. He shipped a Studillac chassis outfitted with heavy-duty dampers springs track bars and anti-roll bars off to Vignale in Italy for a bespoke body. When it returned it was dressed in beautiful new coachwork designed by the great Giovanni Michelotti. Despite the promise of the high-performance chassis and wonderful Italian coachwork the project was fraught with complexities and Frick threw in the towel after just two coupes and a cabriolet.Offered here is the one and only Bill Frick Special GT Coupe. Frick completed three cars a prototype a convertible and this single production GT. The $9000 grand tourer was ordered new by Mr. John Blodgett Jr. a fabulously wealthy heir to a Michigan lumber fortune. He wanted to enjoy an open-air motoring experience but preferred the looks and handling of a coupe so he specified a full slide-back fabric sunroof. He also requested a Pont-a-Mousson 4-speed manual gearbox against Fricks recommendation. Period photos show the car left Vignale finished in a striking light blue livery with a black roof light blue-gray leather interior and dressed with wide-whitewall tires and elaborate wheel covers. Frick later updated it to Borrani wire wheels.The robust history file shows that Mr. Blodgett owned the Frick GT into the mid-1960s when he gifted it to his secretary and her husband. By 1970 it transferred to its 3rd owner Mr. Emmett Boitz of Monmouth Oregon. By then the light blue paint was looking a little shabby so he repainted the car silver. After three years with the Frick Special Boitz passed it to fellow Oregonian Earl Benz who rarely used the car and kept it tucked away until the late 1980s. In 1989 it was repainted its current red with a black roof and sold to Michael Pomerance of Massachusetts. He recognized the cars significance and spent years corresponding with Bill Frick and others to document the cars remarkable history as well as sparing little expense preserving it.Today the Bill Frick Special remains in marvelous condition showing just over 41000 miles and with its older repaint remaining in fine order. The original bumpers and exterior trim are in place and details include the Borrani wheels fitted early in the cars life bespoke Bill Frick Special badges and quad-tip sports exhaust. The original gray leather upholstery is beautifully preserved displaying a wonderful careworn character. Details like the SW gauges and Magic Aire ventilation system hint at its Studebaker roots while the 3-spoke alloy Nardi steering wheel is pure coachbuilt Italian magic. Mechanically the Frick GT is in excellent condition thanks to consistent care and maintenance and the robust nature of its underpinnings. The Cadillac V8 is believed to be the original and is backed by a Pontiac-sourced T-10 4-speed fitted by Frick to replace the troublesome Pont-a-Mousson.Engineered by the legendary Bill Frick designed by Michelotti and built at the storied Vignale workshops the Bill Frick Special GT is bursting with motoring history. Its availability represents a once-in-a-lifetime opportunity to add this genuinely unique Grand Tourer to your stable where it is sure to be a standout.Offers welcome and trades consideredFor additional details please view this listing directly on our website https://hymanltd.com/vehicles/7127-1957-bill-frick-special-gt-coupe/