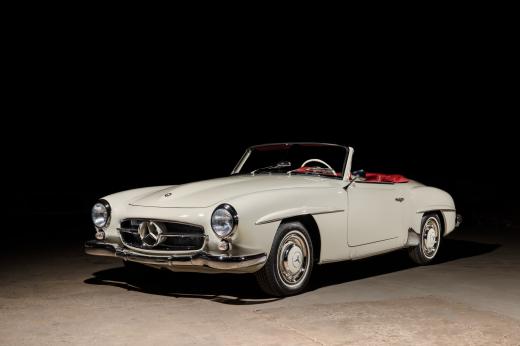 Price: USD $185,000
- Chassis # 1210428500890
- Engine # 1219218500919
- Well Documented Comprehensive Restoration Completed By Marque Specialist Doctor Classic
- Completed To Concours Correct Specification
- Less Than 100 Miles Since Completion Of Restoration
- Offered With Factory Jack, Spare, and Both Soft and Hard Tops
Mercedes-Benz has become a staple in luxury vehicles since its creation in 1926. The Benz part of the name dates back to 1886 when Karl Benz invented the Benz Patent-Motorwagen. The Mercedes part comes from Daimler-Motoren-Gesellschafts Mercedes brand name of cars, the first of which was produced in 1900. The two companies merged in 1926 to become Daimler-Benz AG and began producing vehicles under the name of Mercedes-Benz. In February of 2021, Daimler adopted the name of its flagship marque, Mercedes-Benz, while its heavy commercial vehicles division was split off into its own company named Daimler Truck.
Mercedes-Benz built the 190 SL from 1955 to 1963 as a two-door luxury roadster. It debuted at the 1954 New York Auto Show as a more affordable alternative to the famous gull-winged 300 SL. The two shared many similarities, including styling and engineering. Both featured a double-wishbone front suspension with swing axles in the rear. The 190 SLs R121 frame used a modified unibody floor pan from the W121 saloon. Power-wise, it used a straight-four SOHC M121 BII engine that pushed 103 HP at 5700 RPM through a 4-speed manual transmission. The 190 SL was sold as either a soft-top convertible with an initial price of $3,998 or with a removable hardtop for $4,295. The meaning behind the SL badge was not revealed until recently. In 2017, internal Mercedes-Benz documents from 1952 were discovered which clarified that the abbreviation stood for Super-Leicht. Super-Leicht, in German, translates to Super-Light and at a curb weight of 2,552 lb (1,158 kg), this car truly fits the bill. Mercedes built some six-cylinder prototypes of the 190 SL in 1956. One such prototype featured the block from a 300 SL with a one-off mix of bin parts and was entered in the 1956 Alpine Rally. Two other prototypes received fuel-injected M180 220SE engines and were named the 220 SL. Drivers Rudi Uhlenhaut and Karl Kling lapped the Nrburgring Nordschleife circuit in the two 220 SL prototypes and clocked a time that was 25 seconds faster than the regular 190 SL. In todays world, the 190 SL remains extremely desirable thanks in large part to its ease of useability and timeless beauty. Its delicate lines and elegant stature assure that the 190 SL will remain an object of desire for years to come. There are many examples available out there that have seen lackluster care so finding one that has been properly restored and cared for is highly important.
This example, Chassis No. 8500890 is a US-specification model that began its life under the ownership of a Charles Weber from Ohio. The vehicle was then sold to Charles Woford, also an Ohio resident, in 1974 where it spent a large part of its life. Ownership of the 190 SL is believed to have been transferred to Mr. Wofords daughter, Cheryl Halstead, in 1997. She retained ownership of the car until sometime around 2017 or 2018 when she sold it to a dealer on the West Coast. Its current owner bought it from the said dealer and sent it to Doctor Classic, a 190 SL specialist in Poland, for a Concours-level restoration. Since its completion, the car has only 35 miles on the odometer from post-restoration testing. The body is presented in the restored White Grey factory color and is riding on body color wheels with chrome trim rings and hubcaps. The interior is finished in a gorgeous and correct red leather upholstery with matching red carpeting throughout and a similar red soft top. The White Grey dashboard is also matched by the two-spoke steering wheel and cue ball shift knob. All of the chrome-trimmed gauges remain original along with the 190 SLs factory Blaupunkt transistor radio.
The car is being offered with both a soft top and a hardtop that can be swapped at will as well as a spare tire. Among the paperwork provided is a copy of the vehicles original title, detailed pictures of its lengthy restoration process, and an appraisal report from the German experts at Classic Data. According to their assessment of this 190 SL, it deserves a Grade 1 rating, which is the highest score a car can earn on their scale of 1 to 5.
If there was ever a car that fit the moniker of art on wheels, this would be it. It is a fantastic example of one of Mercedes-Benzs most recognizable automobiles that has been restored to its showroom glory by a master of their craft. Only 25,881 190 SLs were built in the models eight-year lifespan and its likely that not many of them still exist, or have been restored to this level. This car would look right at home on the lawns of Mercedes-Benz club events throughout the world or driving down the sea-speckled stretch of the Pacific Coast Highway. The 190 SLs glamour has been recognized for decades by the likes of Frank Sinatra and Grace Kelly and now you too can experience its sophistication for yourself.