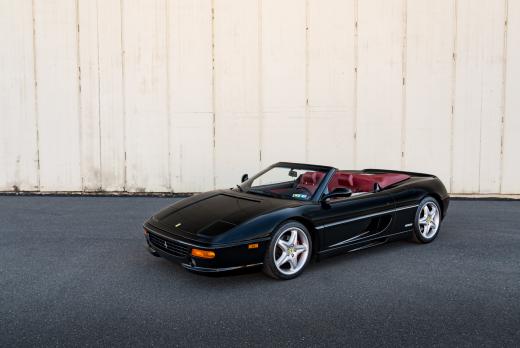 The Ferrari F355, at its core, was a heavily revised and improved Ferrari 348. The engineers at Maranello made significant exterior and performance changes to make the F355 both faster and more practical to drive in different kinds of scenarios like low-speed city traffic. The power increase was in part due to the introduction of a 5-valve cylinder head and a 2 mm stroke over the engine in the 348. These two changes combined brought out 375 hp and 268 lb?ft (268 lb?ft) of torque from the longitudinally mounted 90 V8. The F355 also fixed the notorious transmission issues by installing a coolant heat-exchanger that warmed the gearbox oil quicker than in previous models. The exterior changes came as a result of over 1,300 hours of wind tunnel analysis that showed the need for the cars rear lip and an underbody fairing to generate more downforce. The F355 was also the last Ferrari to offer the flying buttress quarter-window made famous by the 1965 Dino 206 GT, further contributing to its status as an iconic Ferrari of the 90s.

1995 saw the debut of the F355 Spider which ditched the hard top of the Berlinetta for Ferraris first electronically powered soft top. The body lines of the Spider were further honed for 1,800 hours to ensure the Berlinettas aerodynamic performance translated over to the convertible version. At first, the car was only available with a 6-speed manual transmission but as the 1997 model year rolled around, Ferrari offered its F1 transmission as an option. The Spider was the second most popular body style for the F355, right behind the Berlinetta.

This particular example, Chassis # ZFFXR48A2X0113081, is a 1999 Ferrari F355 Spider, the models last production year. The exterior is finished in Nero Black and is complemented by the Red leather interior. According to our research, this is a two-owner car that was sold new in Florida in July of 1998 before making its way to Pennsylvania in January of 2002. The odometer currently reads just over 17,000 miles but the car itself is in immaculate condition. The body is largely flawless and the interior follows suit, with recently redone buttons and finishes. The most recent owner made sure this F355 was always meticulously serviced and only took it to Algar Ferrari of Philadelphia in the 19 years he has owned the car. The CarFax report shows services being done every 500 to 700 miles or every four to six months on average. Apart from those regular services, this F355 also received four new tires in May of 2021. That same month, it benefited from an engine-out service which included a major timing belt service as well as changing all of the fluids, filters, belts, seals, and gaskets. Another service followed in September of 2021 during which the transmission was recalibrated and reset with new components, All of these visits have left the car prancing like new and rearing to hit the asphalt of your favorite windy mountain road.

Upon purchase, the new owner will receive receipts detailing the numerous service records alongside a second set of keys, the original manual, car cover, tool kit and flat repair kit.